Last week Cheslea were banned from signing players in the next two transfer windows for breaching FIFA rules in relation to the transfer of youth players.

It comes following a Fifa investigation into Chelsea’s signing of foreign under-18 players, including former striker Bertrand Traore. 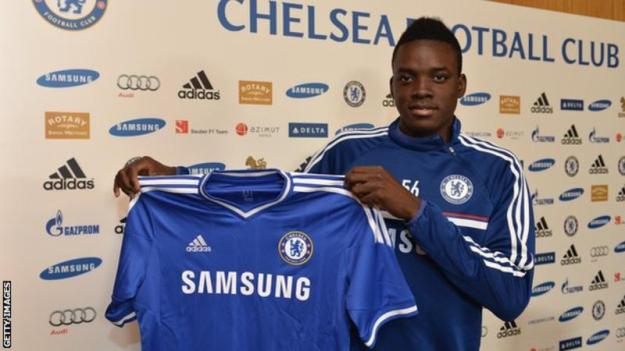 The world governing body says it found breaches in 29 cases out of 92 investigated.

“We welcome the fact Fifa has accepted that there was no breach in relation to 63 of these players, but the club is extremely disappointed that Fifa has not accepted the club’s submissions in relation to the remaining 29 players,” said a statement from the Stamford Bridge club.

“Chelsea acted in accordance with the relevant regulations and will shortly be submitting its appeal to Fifa.”

Fifa bans the transfer of under-18s to different countries unless they meet strict criteria. It brought in the rules to help protect children from exploitation and trafficking.

Under-18s can only be transferred abroad if:

It is the second of those criteria that will cause concern for British clubs.

As it stands British clubs are able to sign player’s aged under-18 year old from other countries that are in the EU or EEA. That is how Arsenal were able to sign a 15-year-old Cesc Fabregas, amongst others.

Once Britain officially leave the EU on March 29th they will fall outside of this criteria, putting an end to sides being able to sign a footballer under the age of 18 from a club within the EU.

Buying players from Spain, Italy or Romania will then full under the same strict rules as signing a player from Burkina Faso.

It is likely British clubs will attempt to get around this ruling in the same way they get around rejected UK work visa’s – they could use a partner club within the EU to sign the player, park him there for 2 or 3 years before signing him from that club.

Leaving the EU could make it easier to sign senior players from outside the EU however.

Britain currently has very strict work visa rules for those coming from outside the EU. This is due to freedom of movement for EU states meaning that the UK Home Office have to apply stricter rules to control net immigration figures.

Once out of the EU, citizens from around Europe will not have a right to come to the UK to live and work. They will have to apply for a work visa alongside everyone else from around the world.

This will naturally see a reduction in EU players coming to England; which in turn could lead to visa’s being accepted for non-EU footballers who would have fallen below the previous visa rules.

No longer being able to recruit your Paul Pogba’s, Cesc Fabregas’s or Gael Clichy’s will impact on English football. However it will also see young English lads get a chance to remain at the club until they are at least 18, instead of reaching 16 and finding their place in the academy taken by a foreign recruit.

It is one to watch.

If you haven't had a look for a while on my little https://t.co/DYtSIZ2ysC take a butcher's. New stuff this year –
24" Clock Wallclocks
Pop sockets
4 way usb extension
North bank poster
100 yrs in the top flight mug. pic.twitter.com/P0CBJByfYc

My Tweets
Join 98,896 other followers