Dad had long since bugged off, mum thought it was too dangerous (even tho she went every week as a girl in the 50s n 60s) and grandad worked Saturdays.

I got a paper round. Up at 6am cycle 2 miles to the shop to do my round before school.

My £3.50 wages paid my travel, got me in the ground and a bag of chips swimming in salt and onion vinegar after the game.

It was different in the mid 80s. These days there no way my kids would be allowed out at 10am on a Saturday and told to be home by 8pm..

I had a good set of mates who went Arsenal. Everyone covered each other for mid-week games and we would go a few London aways.

We would share the Junior Gunner passes, show the bloke at the turnstile then pass it back to the next mate, so we all got in cheaper.

Some games we would be on the North Bank; messing about from 1pm, running up and down the terraces, having a fag, taking piss out of each other. 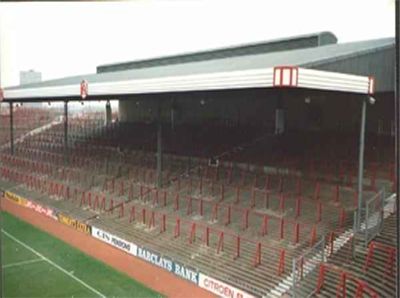 After a while we got brave and moved and stood in the middle, jumping about and singing, often hardly even watching the game. Rip roar give us a song, topside runs from middle, Clock End do yah job and all those songs now not socially acceptable. I fucking loved it.

I got away with going games for about a year before my mother found out. I wanted my own jnr gunner membership and needed her to write a cheque.

Anyways I did the route a lot did growing up, school boys- North Bank – pub and Clock End.

In 1990/91 I worked as a van driver for the printing firm who did the match programmes. Some weeks I’d be in the marble halls every other day. On match days I’d deliver the programmes, park up and meet mates in the pub. I’d be Clock End, my mum upper west and my brother stood by the dugouts. My mum still to this day swears she saw me getting pulled out by the police (not guilty).

The end of terracing and paying on the day ended at games. Going The Arsenal changed for the worse.

Sitting down, singing less, no jumping about, no choosing were to stand (at least we could still smoke).

My buzz was replaced by boozing, drugs, raving and girls. I’d often go out on a Thursday night and get home Monday morning.

Whilst I never stopped looking for our scores the change in football was too big for me to go and watch live. We ended up with a good mob of us that used to meet in various pubs for the sky games and pubs with overseas satellites. All lads like me that had been going since they were kids some games there would be 25-30 of us in east London boozers. A generation lost due to all-seater stadiums.

In 1999, after no live games for 6 years I took the plunge and went back. I managed to get 4 tickets bang where the ‘middle’ was in the North Bank.

I was like a 14yr old again; excited, nervous and looking forward to a sing song. That lasted about 5 minutes, the man and women sitting next to me didnt even stand to welcome the players on the pitch, let alone sing during the game. At the half time whistle I was up quick to get a beer but was delayed as the couple got out what I can only describe as a picnic. I have never hated an Arsenal fan as much in my life (Piers Morgan aside).

Going The Arsenal had changed for the worse…But atleast I was part of the last generation to experience and grow up on our terraces.