The talented Frenchman was close to joining Liverpool last summer, only for a deal to fall through at the eleventh hour due to a suspect knee issue. The failed medical came as a surprise to both Fekir and his club, Lyon

This season he has played 48 games for club and country. His knee might be a “ticking time bomb” and it just did not go off last season.

Lyon president Jean-Michel Aulas has reportedly said that Fekir will leave this summer due to his contract expiring at the end of next season.

Only 25-years-old, Arsenal would have to match the five year contract worth around £140,000 a week that Liverpool had agreed last season.

With a reported £25million release clause, Hakim Ziyech has come to a lot of peoples attention following Ajax’s run to the Champions League semi-final.

With 19 goals and 16 assists last season, the Moroccan international is at his peak.

The concern is those goals and assists have come in a poor Dutch league.

Last season Brighton signed Alireza Jahanbakhsh, who arrived on the South coast with a similar reputation as Ziyech. Jahanbakhsh went from top scorer in the Eredivisie to not netting a single goal in the Premier League.

Perhaps more exciting than Ziyech is his Ajax team mate Donny van de Beek. The Dutchman is 4 years his junior at 22 years old.

With 16 goals and 12 assists last season, he is perhaps more similar to aaron Ramsey or Frank Lampard than Mesut Ozil.

A lot of his goals have come from late runs into the box – something Arsenal miss when Ozil plays. If Unai Emery opts to play two up top next season, van de Beek could be the ideal man to play behind the front two, drifting into the space left by Pierre-Emerick Aubameyang and Alexandre Lacazette when they go out wide.

Alongside Nabir Fekir, van de Beek is probably my favourite. 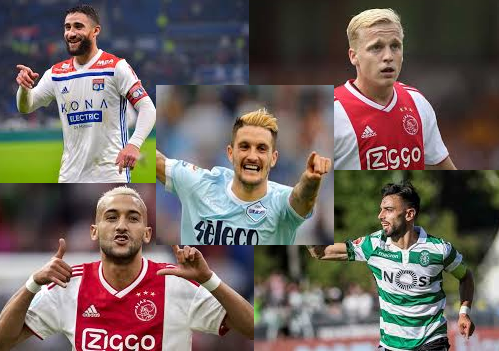 24-year-old Bruno Fernandes has been linked with both Manchester United and Manchester City this summer as he attempts to engineer a move to the Premier League.

Like van de Beek, he tends to play a little bit deeper.

At €55 million, Arsenal might decide that he is overpriced and that their are cheaper options of equal talent available.

Former Liverpool flop Luis Alberto has transformed himself into a fantastic all round midfielder since joining Lazio.

Last season he hit 12 goals with 19 assists. Whilst he has regressed this season with just 5 goals and 6 assists, he could be perfect if Emery wants a number 10 who can also put in a defensive shift.

The way I see it, Arsenal either go big and sign either Nabil Fekir or Donny van de Beek to replace Mesut Ozil – spending £50 million in the process, or they target both Hakim Ziyech and Luis Alberto, recruiting both for a combined £50million.