So Arsenal Twitter eh, what a club, what banter, what a time to be alive!

But before Social Media blew up, how did fans chat online? Well there were internet forums; Arsenal World, Arsenal Mania, Online Gooner, The Herd Forum, where fans went on and ranted. But before they became massive, there was the Arsenal Email Mailing List. It started in the very early 90’s and kids nowadays would think it as prehistoric as I am (so I’m regularly told).

It was a great way for fans to chat about the club, remember there was pretty much no other option back then. It had some really good contributors on it, such as Clive P, Simon Mac, Brian Dawes, Mel Melis and some absolute wands, like Chas N-B who I seem to recall got chucked off several times for his fuckwittery, nothing much has changed then.

I think Myles Palmer was on it, and we had a guy called Larry Gold, who was Gold by name gold by nature! We had a French girl called Josy who was banging Frank Lampard she said, but was probably my first introduction to a catfish! There was Jenny Cann too, who was an absolute star and a fan taken too early by far, so RIP Jenny.

There are quite a few Twitter users who were on it and the brilliant Mike Winnett was the guy who put a hell of a lot of effort in to running it and maintaining some form of discipline. It was pre troll days and was mostly serious grown up fans, so we were fairly well behaved. It was good for overseas fans to chat to local Gooners and was obviously how you could hook them up with tickets for games when they came over, saving them from the touts down Gillespie Road. I recall a meet up was arranged in Paris pre 95 final, but I think I missed that as otherwise engaged at the time.

I’m pretty sure around late 94 there was also a lot of GrahamOut chatter too lol.

Out of all this, we decided it would be good to arrange a few games of football, as an Arsenal fans team.

We called ourselves the Cybury Gooners (yes, I know) but I promise you that was about as geeky as we ever got! A few friendlies were arranged and we soon realised we were half decent, with players from all over London and surrounding areas, bulk of which was around Stevenage/Letchworth.

It came down to me and Mel Melis to take on the difficult task of running/managing the side. It seemed other clubs fans had already started similar teams, Leeds being the originals.

Eventually we arranged our first game against another team, a proper grudge match against Spurs, to be played at St Alban’s ground, November 1995. Both sides played with no less ferocity than the first teams had the day before, when we played the scum at the Lane and lost 2-1. Keen for some form of revenge, we won 2 nil, Darren Skeels the brace scoring hero. Over the years, we played Spurs quite a few times and I’m glad to say we managed to beat them every time. Scoring against them at Market Road was one of my personal playing highlights.

The team lasted almost 20 years, with a roll call of players entering a hundred at least.

We had players come over to play from Nigeria, Canada, Sweden, NZ, Denmark, Ireland, France and many more. Some of the guys I played with are now some of my best mates at the Arsenal.

The number of fan’s teams playing exploded, so much so that there became a league and also the “Worldnet” trophy, played each July, with almost 60 teams competing.

Over the period from 98 to 2004, we were one of the most successful teams around, winning several trophies, including our last league title win in 2000, but best of all the Worldnet trophy in 99, where we beat our biggest London rivals, Accrington Stanley Bowles (QPR) 2 nil in the final in Leicester.

Leeds became host of Worldnet for many years on and it became our regular JBO and a great weekend for 15 or so Arsenal fans to spend on the lash, birding it at the Bondi Beach Club or Majestyks and then getting up for a 9am kick off! We had a few Nigerian lads play for us, Usen Udoh being the star forward and eventually Arsenal Nigeria used to bring their own team over each year to Leeds.

It has to be said that Mel and I’s managerial style was a bit like George and Theo, it was interesting to see them dub Kos in the Adidas ad saying “Do it for the badge”, as this was one of the motivational rocks our success was built upon.

By 2005 though, most of the squad were over 35 and it was becoming harder to compete against the Northern teams who were basically Sunday league sides from that city who all supported Bradford or Celtic and were pretty mustard. It became clear that a vets tournament was required, so that was where we found ourselves for many years, until we had to eventually admit defeat.

But many great memories live on.

Nearly getting demolished by bouncers in Boro due to one of our lads getting lairy about his clothes costing more than all the locals in the queue put together.

Convincing some girls at Grantham services at 3 in the morning that our Swedish midfielder was signing for Arsenal the next day and I was his agent.

The cardboard cut-out of Sol Campbell we carried around Leeds with us just weeks after he signed. The following season, having won the double we took one of Fergie around with us!

Playing Hibs away in a first half snow storm, 2nd half sunshine. The “take it up the arse for a million quid” question at dinner Saturday night each year. Having 3 men sent off in the same game. One of our guys taking a penalty by two footing the ball. Driving to Preston to play a cup semi with only 9 men v Celtic and getting battered. Playing a Spartak Moscow team prior to our ECL game.

On a Sky Sports interview at Worldnet, one of our players referring to some team as a load of Northern monkeys. Playing on the hallowed turf at Highbury! 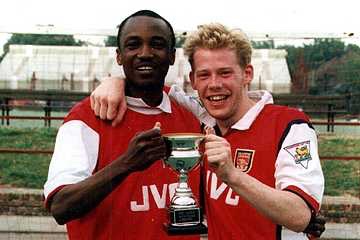 Anyway, it’s 20 years next month since we won Worldnet, so we’ve arranged a reunion game for this Saturday in Hertford. It’s over 50’s (plus any of their sons) versus the under 50’s. We have guys flying in from Canada, Ireland, US and Dubai to play. Some of us are still playing, some are getting the boots out of the garage and putting them on for one last hurrah. I’m sure most of us have varying levels of fitness and if it’s hot, it will be interesting how many last the 90. But afterwards, we’re off for a Turkish meal and then the nearest bar/club to relive our youth (thirties!) and talk about when we were one of the best teams in the country. And no, I don’t mean the Arsenal first team, I mean the Cybury Gooners.

I’ve seen attempts at something similar over the last few years, but that all seemed about self-promotion from certain caricatures. All we ever cared about was playing in God’s chosen colours, for the badge, for the Arsenal. How times change eh?