Arsenal (1) 2 Burnley (1) 1
Premier League
Emirates Stadium, Drayton Park, London N5 1BU
Saturday, 17th August 2019. Kick-off time: 12.30pm
(4-2-3-1) Bernd Leno; Ainsley Maitland-Niles, Sokratis Papastathopoulos, David Luiz, Nacho Monreal; Joe Willock, Mattéo Guendouzi; Pierre-Emerick Aubameyang, Dani Ceballos, Reiss Nelson; Alexandre Lacazette.
Substitutes: Emiliano Martínez, Henrikh Mkhitaryan, Calum Chambers, Lucas Torreira, Sead Kolašinac, Nicolas Pépé, Gabriel Martinelli.
Scorers: Alexandre Lacazette (13 mins), Pierre-Emerick Aubameyang (64 mins)
Yellow Cards: David Luiz, Pierre-Emerick Aubameyang
Arsenal Possession Percentage: 68%
Referee: Mike Dean
Attendance 60,214
There is something special about our stadium at this time of the year, maybe it’s because the grass seems to be greener, or perhaps the spick-and-span feel of the place gives everything a feelgood factor, or it could be the aura of anticipation which hangs heavy in the air giving the impression that at last, we could be really on to something for the first time in quite a while. After just thirteen effervescent minutes, Alexandre Lacazette showed his strength and determination in holding off Erik Pieters, pirouetting awkwardly and shooting the ball through goalkeeper Nick Pope’s legs to open the scoring for the season here at The Emirates.
After this auspicious beginning, the scrap began, which to be fair was always going to happen against the Lancastrians. David Luiz showed both his experience and confidence many times in the first half in dealing with issues that the defence found difficult during the last campaign. His addition to the squad could very well be an inspired one for the club; he may well turn out to be a stop-gap signing at best, but it’s not often that such a defender becomes available, and Unai Emery should be applauded for his gamble. Burnley caused us problems down the channels, and our organisational abilities, which have been called into question before, worked well to neutralise the threats.
Young Reiss Nelson was unlucky not to score (as was Mattéo Guendouzi), but all of our good work during the first half was undone by Ashley Barnes’ messy equaliser just two minutes before the break. The second half became somewhat of a revelation when our Real Madrid loanee Dani Ceballos started to make his mark on the match. Johann Gudmundsson was caught dawdling by the Spaniard, who duly relieved him of the ball, then slotted it deftly to our man in the Number 14 shirt, who wasted no time in introducing the ball to the back of the net. 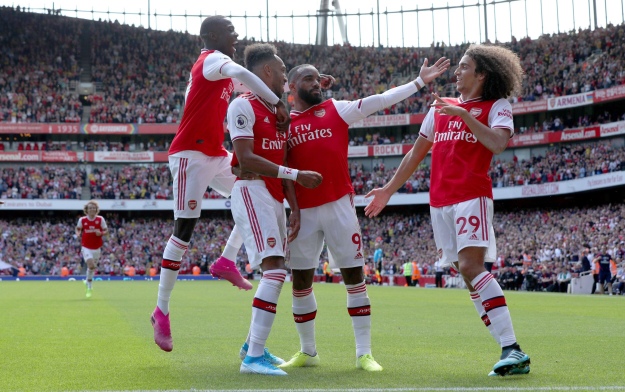 Dani Ceballos is truly a different class, and his awareness both on and off the ball were a delight to behold. He had a hand in both of the goals, and his celebration after Pierre-Emerick Aubameyang scored the winner with 26 minutes left, showed his passion for the club, and above all this, a desire to succeed, an attitude that has been found missing in the team for quite a while now. The rest of the match became a case of game management and just holding on to the lead, which we achieved successfully.
So many good things to mention in today’s match; the defensive pairing of David Luiz and Sokratis Papastathopoulos worked well, and although at times it looked a wee bit frail, time and work on the training pitch will iron out the rough spots there. The young guns, namely Reiss Nelson, Joe Willock, Ainsley Maitland-Niles and Mattéo Guendouzi all gave good accounts of themselves, whilst one feels that Nicolas Pépé will become the player that we all know that he is eventually. And what is there to say about our forward partnership of Alexandre Lacazette and Pierre-Emerick Aubameyang? They surely must be one of the most feared strike force pairings in Europe, and as it looks as if they have simply carried on from where they left off from last season, we should be in for some exciting matches in the coming few months. This is the first time in ten seasons that we have earned maximum points from our first two matches of the season, and although it is not best practice to get carried away, it still has to be said that we go into the Liverpool match at Anfield next Saturday afternoon with our heads held high and hope in our hearts.
Remember everyone, keep the faith, get behind the team and the manager, as this season is going to be crucial for our future success in all competitions. Stick with the winners.
Our next match: Liverpool at Anfield Stadium on Saturday, 24th August at 5.30pm (Premier League). Be there. Victoria Concordia Crescit.
Steve