Harry Kane is a cheat.

He is not the only one. Many other players in recent years have developed a new way of cheating, a new way of diving. “Initiating contact” is what it is called.

Jamie Vardy and Riyad Mahrez won the league with Leicester back in 2015/16 with a key tactic being to initiate contact to win penalties. They scored 10 from the spot that year.

Tottenham have been initiating contact for a while. It is a tactic that Mauricio Pochettino not only supports but promotes.

“Football is about trying to trick your opponent” Pochettino answered following Dele Alli being booked for simulation back in 2018. Clearly the likes of Kane, Alli and Son practise “tricking an opponent” through “initiating contact” considering how regularly they do it (note: Son did not dive at the weekend. It was a clear penalty).

Vardy used to initiate contact with an opponent by sticking his own leg out as he ran past. He would then go down and it would appear he had been fouled. Referees would miss the fact that it was the Englishman who had kicked out at his opponent, not the defender fouling Vardy.

Kane does it in a different manner.

He attempts to get in front of defender, cutting across them which causes contact.

At the weekend Sokratis did not foul Kane. Kane jumped in front of him, initiated the contact and went down. Just because there is contact, does not mean it is a foul. 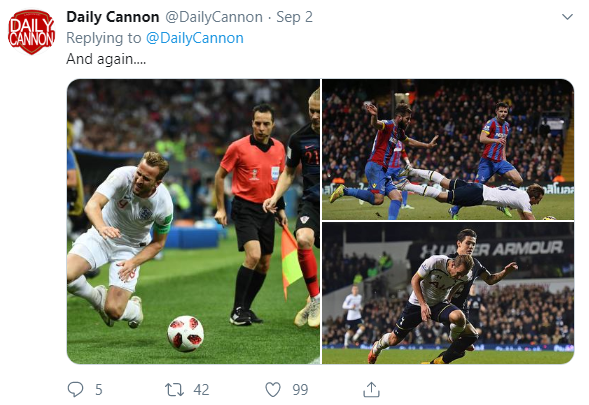 Kane now has a reputation for this kind of behaviour, and whilst the BBC pundits and his bum chum Jermaine Jenas might not call him a cheat, he is just that. A cheat.

In Pochettino’s mind, Kane is tricking his opponent. He is forcing his opponent to touch him and then going down. I have seen Spurs fans defend his behaviour by calling it “clever”.

Their is a game change now that is going to see the amount of penalties won by the likes of Vardy and Kane dramatically reduce. VAR.

VAR can rule on penalties, for clear and obvious errors by the referee. This will change the match officials mentality when it comes to referring a game where a known cheat is playing.

Instead of blowing up at what seems to be a foul, they will now leave it to VAR to bring it back.

I am certain had VAR not been in place on Saturday, referee Martin Atkinson would have blown up for a penalty. But instead he left the decision in VARs hands.

The television match official informed him that it was not a penalty and the game moved on.

VAR might not be perfect, but it will stamp out the divers, the cheats, the tricksters and those the initiate contact.