Less than a month since our previous meeting, we play Chelsea for the final time this season in the Premiership tonight. Judging by both of our results from three days hence, it goes without saying that a win is desperately needed at The Bridge for us. But it is good to see Hector Bellerin back in the first team line-up, and even better for him to return as team captain for this highly-charged London derby.

It was quite a messy start as far as we were concerned, with a corner or two given away, Shkodran Mustafi temporarily incapacitated with a painful injury and the home team coming close to scoring from a corner in the tenth minute. However, we live to fight on, and the midfield area was getting mighty crowded with much of the early action being concentrated in the centre of the pitch. Defensively we looked wooden again, with an inability to gain control of the game quickly when Chelsea attacked. All hell broke loose on the twenty-fifth minute when a poor ball from Shkodran Mustafi let in Tammy Abraham; he lost Bernd Leno easily and David Luiz had no option but to bring him down in the penalty area. The result? David Luiz getting his marching orders from Stuart Attwell, and Chelsea taking the lead from the subsequent penalty via the right foot of Jorginho. Down to ten men, things started to look a trifle dicey for us now in all areas of the pitch. Despite a period of about five minutes before half-time when we started to wake up a bit, the home side recovered and wave after wave of attack on our goal started to take its toll on our defence. With no shots on the Chelsea goal in the first forty-five minutes, the referee’s whistle for half-time came as a relief for us. 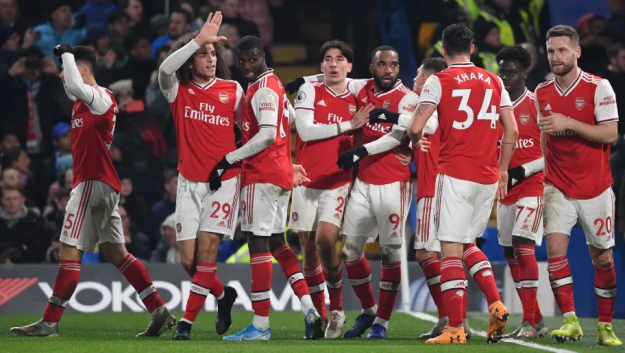 The second half started pretty much as the first one finished, with the home side putting pressure on us, which is only to be expected under the circumstances. Mattéo Guendouzi replaced the ineffective Mesut Özil after fifty-four minutes, but despite new legs being introduced, we still looked all at sea with the inability to make our mark on the match. Somehow, literally out of nowhere, from a Chelsea corner that we cleared, Gabriel Martinelli grabbed the ball and ran the whole length of the pitch (sixty-seven yards to you) and coolly slotted it past Arrizabalaga to equalise the scores in the sixty-third minute with our first attempt of the match. So now, finally we have a game on our hands! We certainly played with more purpose now, as Arsenal felt for the first time in the match, that they actually had a chance of winning the game; and with Alexandre Lacazette’s goal chalked off for offside on the seventy-third minute, who knows? Rob Holding replaced Nicolas Pépé with ten minutes to go, and although we were under renewed pressure from Chelsea, we managed to soak up pressure extremely well. With six minutes left on the clock, controversially with Tammy Abrahams returning to the pitch on an offside position, César Azpilicueta scored for the home side from a corner; but it wasn’t over, even then. A minute or so later, the ball came to Hector Bellerin on the right, and cutting inside scored a beautiful goal with his left foot from outside the penalty area with three minutes left of the match. Joe Willock replaced goalscorer Gabriel Martinelli with a minute left of normal time, just to give us something extra for the four minutes of injury time. It made no difference overall, despite one or two close calls from both sides, the match finished as a draw.

Wow. Two shots, two goals, we’ll take that, any day of the week. Despite all of the disasters out there at times tonight, particularly in the defensive area, the one thing that we cannot criticise is our indomitable and unshakable spirit, and with ten men on the pitch as well! Of course we still have extreme defensive issues and questionable leadership problems, but tonight’s spirited performance went a long way to start righting many wrongs. The road is long, but with the right signings in the next few transfer windows, Mikel Arteta’s new broom may just well pay off eventually. Remember everyone, keep the faith, get behind the team and the manager, as this season is going to be crucial for our future success in all competitions. Stick with the winners. Our next match: AFC Bournemouth at The Vitality Stadium on Monday, 27th January at 8.00pm (FA Cup). Be there, if you can. Victoria Concordia Crescit.