At the end of the day, it was purely down to five goals from five different goalscorers, and a performance that truly showed Arsenal’s class at last in the Premiership. Despite the last few matches in which we looked anything but top four contenders at times, tonight’s performance was absolutely sublime; and this was down to the enigmatic and controversial figure of Mesut Özil.

Okay, it would be easy for the nay-sayers to state that “it was only Bournemouth” and “what else do you expect?” but the bottom line of it all was that Arsenal found their inner beast here at The Emirates tonight, and for once they were single-minded in their approach and ruthless in the delivery of their victory. Right from the fourth minute, when Mesut Özil scored, it looked the match that it really became, where there was only one team on the pitch tonight.

Mesut Özil’s silky skills shone through silver and gold throughout the proceedings, and the second goal, which came after 27 minutes showed his dominance and influence on the pitch. Henrikh Mkhitaryan passed the ball to Mesut Özil who quickly slotted it back to him and of course our Armenian striker wasted no time in scoring Arsenal’s second of the night. Three minutes later, Arsenal hearts were a-flutter in the stadium when the visitors got a goal back through Lys Mousset who scored with a simple tap-in, but really there was no need for panic to set in. For the rest of the half, Arsenal were solid, yet still created chances to score, and despite one or two scares, we went into the break on the ascendancy. 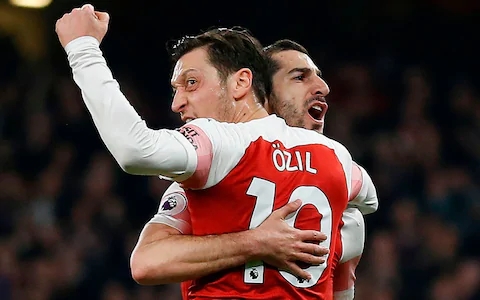 A couple of minutes into the new half, Arsenal were three goals to the good when Laurent Koscielny scored off a post, and although Pierre-Emerick Aubameyang drove the ball home to make sure, the tech results proved beyond doubt that it was the captain’s goal all the way. And still Bournemouth had their chances with a Dan Gosling shot striking the crossbar, and Bernd Leno making an athletic save, but all in all our luck held and our night was not to be ruined. Pierre-Emerick Aubameyang showed supreme confidence when he run onto a Henrikh Mkhitaryan pass and simply went past the Cherries’ goalkeeper and placed the ball into the net for the fourth goal, and twelve minutes from time, the substitute striker Alexandre Lacazette was the fifth and final Arsenal player to get onto the score-sheet tonight with the winning goal from a firmly-taken free-kick. Arsenal 5, AFC Bournemouth 1. A scoreline that brings back confidence to a sometimes lacklustre team and a warning shot across Tottenham Hotspur’s bows for the North London derby at Wembley Stadium on Saturday lunchtime.

Mr. Emery’s tactics tonight were absolutely spot-on; he saw the challenge of Bournemouth, rose to it, met it and summarily destroyed it. Arsenal are now fourth in the Premiership and at this stage in the season, it is vitally important for us to retain the momentum and keep going and maintain the boiling pot at all costs. Whether this team will be same one that starts on Saturday is open to conjecture, but with three important matches coming up in the next eleven days against Tottenham Hotspur, Rennes (in the Europa Cup) and Manchester United, the pressure is truly on. Keep going lads, you’re looking good; don’t let it slip.  Remember everyone, keep the faith, get behind the team and the manager, as these early days are going to be crucial for our future success in all competitions. Stick with the winners. Victoria Concordia Crescit.

Back to the Vitality Stadium (Dean Court) for another heart-stopping match; in the last two games there, we drew 3-3 and lost 1-2, and in the forner, we wre 0-3 down before dragging a point out of what was seemingly a lost match. Today with a new manager and new players, we can surely hope for a victory on the south coast! Bearing in mind that Arsenal have drawn the last four matches, it became important for everyone associated with the club to chalk up a win today.

The atmosphere was electric in the stadium from both sets of supporters, and remained so, particularly when the home side had a goal ruled out for offside ten minutes into the game. Bournemouth remained on the ascendancy for the next twenty minutes when it appeared that they not only had several close chances, but controlled proceedings. All this went by the wayside when on just half an hour on the clock, they conceded what can only be explained as a bizarre own goal. Sead Kolašinac crossed from the left, and Jefferson Lerma stuck a leg out to block the cross, but only succeeded in firing the ball past the hapless goalkeeper. Although one down, this merely hardened Bournemouth’s resolve to equalise the score, and by half-time, it could be stated that it was truly anyone’s match to win. Sure enough, Bournemouth’s persistence paid off with a first-half injury time equaliser from Josh King that rejuvenated the home crowd. 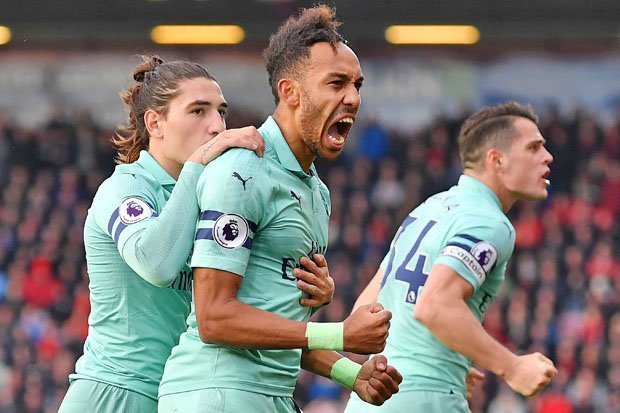 Arsenal never gave up, and in the second half started to control the match with the close passing and firm tackling that we have come to expect of them this season. After several close misses, Arsenal found a way through the solid Bournemouth defence with nearly twenty minutes left on the clock. Alex Iwobi and Sead Kolašinac linked up very well on the left hand side, and with Pierre-Emerick Aubameyang playing in the central striker’s role (in the absence of the injured Alexandre Lacazette) found the net with a sliding finish that left the home side deflated. Bournemouth came close a couple of times in the closing stages, but ultimately were unable to grab an equaliser; although Arsenal looked in trouble a few times throughout the match, they were able to soak up periods of intense pressure to thoroughly deserve their three points, which meant that not only this win extended their run to 17 games, but more importantly kept in touch with the top four, now being just a point behomd fourth place Chelsea.

This match today saw the players step up and although being under considerable pressure for large periods of the game, still managed to regroup and bring the match to the home side. Lucas Torreira and Sead Kolašinac were immense today, with their dynamic and assertive play constanatly inspiring their team-mates throughout the game. Thye decision by Mr. Emery to keep Mesut Özil on the bench was the correct one overall; there are some games that just don’t suit his style of play, and today’s was one of those. Pierre-Emerick Aubameyang is fastly becoming (what looks to be) the Premiership’s top striker with 23 goals in 26 league appearances (and the tenth this season across all competitions), and in today’s match he showed his class throughout. We are dogged, determined and looking hard to beat, and with the next two Premiership matches being a home match against Tottenham and Hotpsur and an away tie at Manchester United this win will give everyone the confidence that they desperately needed, Remember everyone, keep the faith, get behind the team and the manager, as these early days are going to be crucial for our future success in all competitions. Stick with the winners. Victoria Concordia Crescit.

Loving the most popular Xmas card is the Emery one..https://t.co/vlaHeBWIC8 pic.twitter.com/ooG6YmRsR3

This international break seems to have been the longest in history.

After 7 games in 20 days, Arsenal games were coming thick and fast prior to the recent interlul. No games in the last 14 days has made it a very dull 2 weeks.

So today we are back, and looking to return to winning ways.

17 unbeaten in all competitions masks the fact that Arsenal are 3 Premier League games without a win and have fallen out of the top 4.

Just the 1 win in 5 games – in the League Cup against Blackpool, means we are in the first mini blip of the Unai Emery era.

With league fixtures against Tottenham (home) and Manchester United (away) following Bournemouth, it is essential that the side gets the 3 points on the south coast.

A failure to win could see the wheels come off a bit, and could result in no Premier League wins in 6 games. Victory against Bournemouth, followed by a win in Ukraine and we then go into the North London full of confidence.

Arsenal come into the game with an injury crisis having creeper up on the club.

Unai Emery has offered positive news regarding the Frenchman’s return.

“He feels better in each training,” said Emery of Koscielny. “He is close to being with us for competitive games. We are happy with him.”

“He is with us every day and we are going to think after the international break how we continue working and playing games.”

With Danny Welbeck already sidelined with an ankle injury, strikers Alexandre Lacazette (groin) and Pierre-Emerick Aubameyang (back) are doubts.

The pair have been involved in gym work at London Colney this week, but not participated in full training. Emery will likely be forced to risk one.

Elswhere, full-back Nacho Monreal is sidelined for the next two weeks with the Spaniard suffering with a hamstring injury, a problem which is also affecting Stephan Lichtsteiner.

This will mean that Saed Kolasinac will be given a run in the team, and an opportunity to stake his place to be Arsenal’s left back for the long term future.

We will also probably see the return of Sokratis to the centre of the defence, with Rob Holding the man to miss out.