Great game to end an era

It’s not often that you walk away from a 5-1 victory with a feeling of sadness to go with the joy. But for thousands of Arsenal fans a sense of loss dominated a wonderful final game of the 1991-92 season. It was the last ever game of the beloved North Bank terrace which had been a place to stand and watch football for decades. The Taylor Report was soon to dictate law and top flight clubs would have to replace the standing areas with seats. After the game, a few thousand fans stayed behind for a couple of hours to remain in the old terrace for a little bit longer. Fight Sing where ever you may be – we are the North Bank Highbury was the chant heard two hours after the game, as the last fans left the stadium after a solemn sit in.

As for the match itself, there were two main focuses of attention. Firstly a win was necessary so that the old North Bank could go out in style. Secondly, there was a chance that Ian Wright could end up the league’s top goal scorer. At the start of the day he was one goal behind Tottenham’s Gary Lineker and Spurs were playing away at Old Trafford. If Lineker were to get just one goal, then Wright would need a repeat of the hat trick that he’d at scored against the Saints earlier in the season.

At Highbury in May 1992 the first half of Arsenal-Southampton was quiet and goalless, with the main highlight being a disallowed goal from Wright which looked like a harsh decision. The second half however, was symbolic of the final third of the season. Up to February, Arsenal had been inconsistent and had put up a weak defence of the title. Then everything came together with a 7-1 thrashing of a strong Sheffield Wednesday side; six of the goals coming in the space of just 20 minutes. From that point onwards Arsenal would remain unbeaten and put in a late challenge to finish third and gain a European spot. It may have been too late to get back in the title picture but Arsenal’s rampage on the final three months of the season was thrilling. In contradiction to reputation, George Graham’s team were capable of playing free flowing entertaining football, with Limpar, Merson, Wright, Rocastle, Campbell and Smith providing a formidable attacking force. If there was a fault with the 1991-92 team then it was the leaky defence. Overall they conceded 46 league goals, whereas the season before only 18 goals went past one of the meanest defences in English football history.

The walloping of Southampton began when Kevin Campbell scored from a header for his 14th goal of the season. A few minutes later and was back to square one – Glenn Cockerel scored from a Le Tissier cross to put the Saints level. Arsenal reacted quickly and Paul Merson made a run into the box and was brought down to earn a penalty. Lee Dixon would normally have taken the kick, but Wright was after the Golden boot and allowed to step up and score his 27th league goal of the season. Just like Kevin Campbell had done with the opener, Alan Smith also scored a header from a corner to for his 17th goal of the season. 3-1. Smith and Campbell had combined brilliantly as a striking partnership the previous year to help Arsenal win the league title for a tenth time. In 1990-91, Smith would earn the second golden boot of his career, but on this afternoon with the clock ticking down, it looked unlikely that his team mate Wright would achieve the same honour. With 90 minutes gone, Wrighty was still one goal behind Lineker who had managed to score for Spurs at Old

Trafford. Wright’s chances of becoming top goal league scorer in his debut Arsenal season depended on two goals in injury time. It was a farfetched dream, but for the last ever game of the North Bank terrace a miracle happened. David Seaman leaped to catch an incoming cross and fed the ball to the deadly striker. From deep in his own half Wrighty ran on goal, beat a couple of defenders and smashed the ball into the bottom corner of the Saints goal. Seaman said afterwards that he normally would have just let the ball go out for a goal kick, but in the last split second he decided to catch it and keep the ball in play. Wright was level with Lineker, but the icing on the cake hadn’t been spread just yet. A minute later, Alan Smith and Kevin Campbell made a surge into the penalty box. The ball found its way to Wright who scuffed it with his shin to make it 5-1. Of all Wright’s 29 league goals that season, it was by far the luckiest and the worst – but also the most satisfying. The North Bank went truly ballistic. Campbell lifted Wright on his shoulders in a joyous celebration that was as messy as the goal. Not only did Ian Wright win the golden boot, but Arsenal would also be the league’s top scorers. Incredibly, despite being the most lethal and exciting striker in the country, Ian Wright was not picked by Graham Taylor for the England squad that went to Euro 92. In three lacklustre games in Euro 92 England would score just the one goal which was in contrast to the Arsenal attacking force of the 1991-92 campaign. It may not have been a trophy winning season, and in the end we didn’t even achieve a European spot. But the North Bank terrace was more important than any piece of silver wear – and the attacking performances and great goals in the final games of the season were a wonderful send off. Arsenal-Southampton was a perfect conclusion to a beloved era of history. The old North Bank had seen some great moments over the decades and this Highbury classic was up there with some of the best.

Matthew Bazell
Follow @MatthewBazell
Matthew Bazell is the author of Theatre of Silence: The Lost Soul of Football 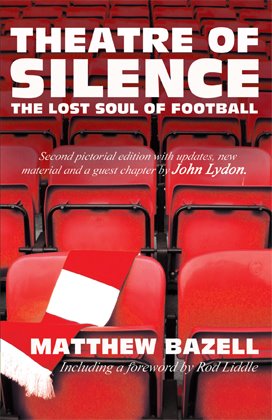 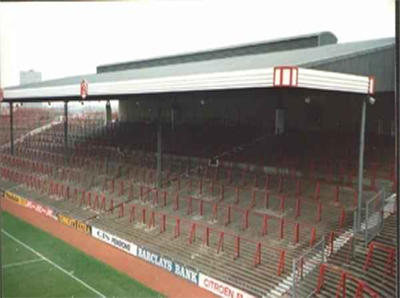