I try to stay away from politics and religion in my blogs and on my Twitter. It opens too much of a can of worms that you can not close. It is not worth the time.

However, I am lifting my self imposed ban to discuss an article I read yesterday on the Sunday Times website.

The article is supposed to be aimed at Russia. Questioning whether “England’s ethnically diverse squad and fans be safe from violence and racism”. It would probably be a valid article – although possibly unneeded because we all already l is Russia is a hotbed of racism and shouldn’t be hosting the World Cup.

But an sort of validity is destroyed by “The first ever Sunday Times Apprentice” Shingi Mararike’s first paragraph.

So the self-proclaimed “Arsenal fan” claims that whilst he grew up idolising Thierry Henry, he never once asked to visit Highbury due to it feeling like a “no-go zone.”

Basically he is saying that he never went to Highbury because it was not a place for black fans. And I imagine he would include other ethnic minorities in that as well.

Now before you spit your tea out, let’s paint the picture.

Shingi Mararike, according to his LinkedIn, started college in 2012.

He would have been around 16 when London were hosting the Olympics.

Arsenal were at their swashbuckling best in 2004, the team went unbeaten. A team whose strongest XI contained 7 non-white players and not a single white Englishman:

So before he had even hit 10 years old, he had made the decision not to go to Highbury due to it being a “no-go zone” for ethnic minorities. And then he uses that experience 14 years later in an attempt to add weight to his article.

This would be a contender for the Didn’t Happen of the Year Awards.

On his online bio, Shingi does not mention football, or any sport, as one of his interested. Instead he mentions “politics and current affairs”. 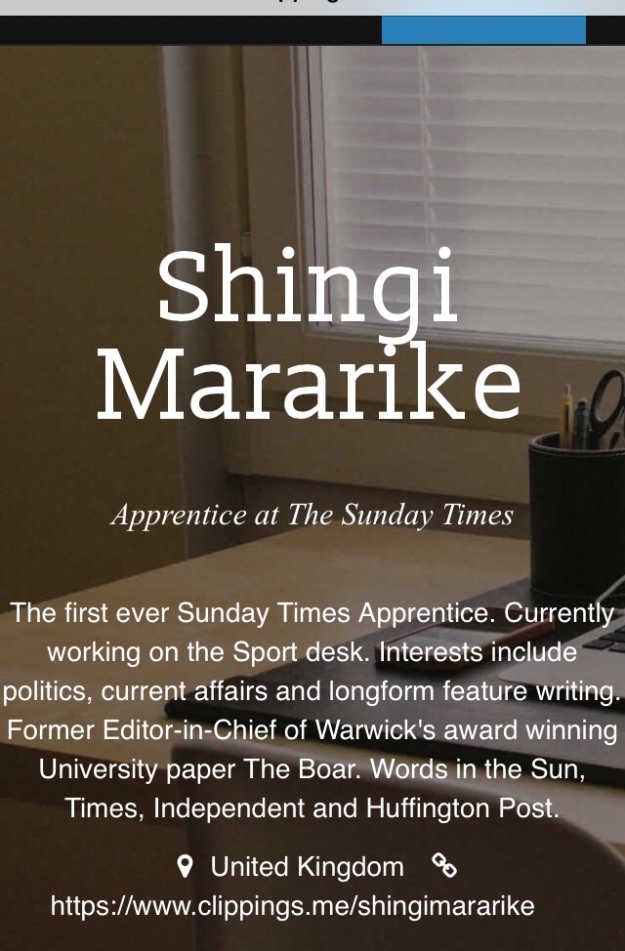 I imagine at 7 years old, Shingi was not even a Junior Gunner, and had little, if any, interest in going to Highbury to watch The Arsenal.

Had he done so, his “personal experience” of what Highbury was like would be very different:

He’s talking absolute fucking shite. Every black kid in my area supported Arsenal or Liverpool in the late 80’s early 90’s and there was loads of us that went over together weekly and stood on the North Bank

We have always been the most multi-cultural club… never been a problem.

As 33 year son of an Indian immigrant I used to sit on the north bank with my fellow Asian cousins, Highbury was never intimidating it was on magical!

No you specifically mentioned Highbury. So many grounds that really were no go areas you could have picked. But for some strange reason you picked the most racially diverse ground in the 80’s & 90’s. And you’d never been so actually have no clue!

Plenty of Arsenal fans have very different personal experiences of going down Highbury than the journalist in question, who remember, admits he never went to Highbury – yet still attempts to make it appear like it is a racist hell hole.

Now I am not naive enough to believe that racism has never existed over the Arsenal. There will always be idiots. But Arsenal was certainly not a “no-go zone”. And especially not in 2004.

Even going back to the 70s & 80s, when the National Front were using football grounds to recruit new members, Arsenal were one of the few clubs that the racist group failed to break into. Due to actions of the fans.

If you want to get a true view about what it was like around Highbury in the 70s and 80s, and how fans halted the rise of the NF, have a read of the brilliant article on 8by8 Mag about how the NF attempted to make its “presence felt around Highbury” and how Arsenal fans “helped keep the NF off the terraces.”

Normally this sort of thing I would ignore. But here is a journalist attempting to claim in a national newspaper that Highbury was a “no-go zone” if you were not white.

It is rubbish. It is dangerous. It is poor journalism.

Still time to get a new or partworn shirt before the world cup starts…England shirts start at only £10.https://t.co/nP9XI38L4H pic.twitter.com/XeSRwYiwP7

Since leaving Highbury in 2006 under the promise of becoming a European Super-club, it seems to me that the height of our expectations is to be also-rans.

Here we are 8 years after our move & what benefits have there been other than false hope?

* We’ve genuinely competed for the title 2 years at most, to come unstuck in the latter part of the season (08 & 14)

According to reports, we’ve accumulated near on £100m in this period which could be made available for player transfers. Yes we’ve spent a fair bit this summer but are they along with the likes of Giroud, Oxlade-Chamberlain, Monreal, Cazorla etc not similar to what we would have bought at Highbury?

There’s not much monetary difference between those players & what we paid for the likes of Pires, Hleb & Overmars in relative terms

Yes I accept that Sanchez & Ozil are the exception to the rule but we also constantly spent what was considered big money at the time on Henry, Reyes & Wiltord for example.

I don’t want to get into the exact names of ‘who we should have bought this summer’ debate as we’ll all have different opinions. I’m also not criticising who we have brought in as there is no doubt that all of them will be an asset to our squad but they are all like for like position wise with what’s left the club.

According to the club website we now have 6 defenders to choose from for a 50+ game season. How long will it be until we hear ‘Mertesacker is jaded’ after he played right until the end of the World Cup?

Here lies the problem, there should have been more than the 5 we brought in. We have a lopsided squad, top heavy with creative midfielders. If you & I can identify the areas as weaknesses, why can’t the Hierarchy at our club? The excuse of no money or players not available just doesn’t wash anymore.

As it stands, the only benefit of our move to Emirates Stadium I can see is amassing a huge figure in the Bank. Of course that isn’t a benefit to the ordinary fan if it’s not being invested in the team or used to reduce ticket prices. Only the Shareholders will see benefits with their stock value increasing on a daily basis.

I’m not sure that’s what I signed up for when we moved from our beloved Highbury.

We’ve seen match tickets hit £100+ per game mark & cheapest season tickets now up to over £1000 per year & they’re only going one way. Thousand’s of loyal fans priced out for what exactly?

I hope The Arsenal win the quadruple this year (as I do every other year) but realistically at this stage we are looking at scraping 4th & hoping for another Cup win.

Should that be where we are after all the promises when we moved?

Written by an Admin from http://www.facebook.com/shewore

I’d like to counter Keenos article regarding his disgust over Arsenal fans booing at the final whistle of Wednesday’s draw. https://shewore.com/2014/02/13/arsenal-fans-disgraceful-booing-as-team-sit-second/ I’m not going to put up an argument against his dislike of the booing (though my feeling from watching the match on TV, was that some of the booing was also directed towards United for finishing the game on a whim and being negative).

However, at least those who booed stayed until the end like a football supporter should do. Half the crowd had buggered off early – as they always do win lose or draw. Why is that not the bigger issue? Whether it’s an exciting game, or a dull game, this mass exodus is the worst form of support – but yet a few timid jeers become the measuring stick of dissatisfaction and fickleness. It baffles me that fans would pay such a high price to go to a game and yet arrive 5 minutes late, leave for a drink 5 minutes before halftime, get into the second half 5 minutes late, and then leave 5 minutes before the final whistle. I’ve said that £62+ is an outrageous price for just 90 minutes, but in this case we’re talking £62+ for just 70 minutes. “I’m Arsenal till I die -but I can’t stay till the end, have to go now bye…”

“We’re by far the greatest team the world has ever seen- but even so, I’ve a very early start tomorrow so must beat the rush”

I’d certainly like to take issue with Keenos comment that “Arsenal fans acted spoiled last night”. You mean the same fans that pay the highest ticket prices in world football? I would not label any set of football fans in England today as spoiled. I would describe all football fans as trodden upon pawns, of whose loyalty is taken advantage of by the forces of greed. Football clubs are spoilt because enough fans will stick with them no matter how badly they are treated. Ivan Gazidas’ distain for the fans was highlighted most starkly last month against Tottenham, when he hit supporters with Grade A prices -straight after the New Year when people were short of money. It was an FA Cup game and should have been Grade B, yet the board got away with it because the club is heavily spoiled with loyal followers. Arsenal PLC is a spoiled brat who gets what it wants because of unconditional love. The fans are the ones who have made the playing staff, the management and the executives filthy rich, so if they feel like booing very now and then, I’d say live with it and accept it because your greed created it.

I stopped attending games because of the prices, but I was the kind of supporter who would sing for 90 minutes and I would not have booed a team that is just one point off the top. However, I don’t blame anyone for feeling like jeering, because what they witnessed on Wednesday was passionless, boring and lacked quality –and yet was incredibly expensive. They’ve been sold a dream of caviar and been provided with junk food. Not so many years ago that same fixture would have cost you the equivalent price of a cinema ticket and the fans would have accepted that sometimes you have off days. There would not have been booing at the end. The greed culture of modern football has created this monster in the stands and so it’s a simple case of you reap what you sow.