One side of the Wenger debate I always find distasteful is when people question his achievements, his success,. His trophy haul at Arsenal. It is distasteful because it ends up with both sides of the narrative slagging off two Arsenal legends. Arsene Wenger and George Graham.

It usually starts when, during a Twitter argument (why do grown men spend so many hours arguing on Twitter?) someone brings up Arsene Wenger’s trophy haul as a signed of how he has been a success. 3 league titles, 1 unbeaten season, 5 FA Cups, 2 doubles. It is undeniable that he has won more than some clubs.

It usually then leads to someone posting up something like this:

An image attempting to discredit the success of Arsene Wenger, rather than celebrating it. How agenda driven can you get that you refuse to celebrate success?

And this is where the nastiness begins. Rather than accept that in the last 30 years, agree that Arsenal have had two great managers, fans from both sides of the narrative end up in a point scoring contest. Trying to put their man (Wenger or Graham) on a pedestal, whilst attempting to knock down the other.

Surely it would be easier to accept that both men did wonderful things for Arsenal Football Club, and both men had their faults and made mistakes whilst at the club? 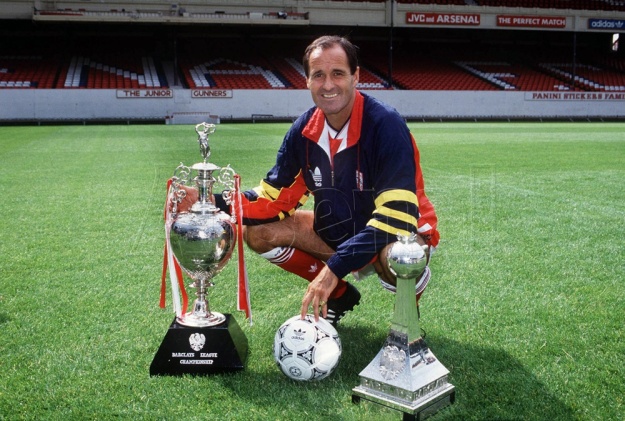 Both Graham and Wenger are up their as the most important men in Arsenal history. Alongside the likes of Danskin & Humble, Norris and Chapman, and not forgetting Don Howe. Men who gave their lives for the club. Are key components in make Arsenal the great club they are now.

George Graham took us out of the dark ages. Repairing the damage from the Terry Neil era. He led us to our first trophy for 8 years. Our first league title in 18 years. He made Arsenal a force to be reckoned with again. He broke up the Scouse Monopoly on league titles.

To misquote Donald Trump, George Graham Made Arsenal Great Again. He laid the foundations which the current House of Arsenal was built on.

Likewise Arsene Wenger revolutionised the club. He took us into the 21st century.

We he arrived we were a club in crisis. Scandal hit, a drinking culture, players refusing to play for management. He not only got the side to be a success again, he changed the entire culture of the club.

Read Tony Adams’ book. Read Ray Parlour’s book. Both praise Arsene Wenger for saving their lives. Saving their careers. And he did it with a lot of players at Arsenal at the time. The drinking culture went out the window. In came fitness regimes. New training ideas. Scouting systems. Where Wenger lead, other clubs followed.

Like Graham, Wenger made Arsenal a force, breaking up the Manchester United dominance of the Premier League – albeit not often enough perhaps.

Both Graham and Wenger transformed the club. Can we not accept that?

When it came to players, both worked some magic, both had their downfalls.

Graham bought through the likes of Adams, Rocastle, Davis, Merson. Signed the likes of Wright and Limpar. Built the famous back 4.

Likewise Wenger signed Henry, Vieira, Petit, Gilberto, Pires, Overmars. Bought through the likes of Fabregas. Graham was very much a proud Brit in everything he did. Wenger focused more on Europe. Both signed and developed some legendary players. Built some legendary teams.

Both also mistreated some players. A lot of people talk about how Arsene Wenger is badly mistreating Jack Wilshire at the moment. How he has backed lesser talented players (the likes of Denilson and Diaby), whilst discarding a potential Arsenal legend.

But then remember what George Graham did with David Rocastle. He left him crying in a car when he told him he was being shipped off to Leeds. An Arsenal boy, the classiest English midfielder of his generation, shipped out of Arsenal at just 25 years old, to be replaced by John Jensen.

Arsene Wenger can be criticised for ignoring the dirty side of the game. Not having enough work horses in the team. On the other hand, Graham had a thing against flair players. The treatment of Rocastle, the discarding of Anders Limpar. Both managers had their faults.

Whenever someone brings up the unbeaten season under Wenger, rather than all smile about it, there is always someone who responds with “But George Graham’s 1991 side was better. It scored more, conceded less, lost just once”.

Here’s a novel idea. Rather than arguing over this, why not be grateful we have had both 1991 and 2004? Two league title winning seasons. The same as Spurs. Then we have another 11 to be proud of as well.

Both Wenger and Graham have bought some fantastic memories to Arsenal fans. Moments that have defined their generation of followers.

Anfield 89, the 1994 European Triumph, the first club to win the domestic cup double in 1993. All brilliant stuff.

Likewise in 1998, when Adams left foot half volleyed that ball into the back of the net against Everton. What a moment. 2 doubles under Wenger. THAT unbeaten season. More FA Cups and Wembley days out than most clubs have in their history.

Why do some people seem unable to embrace ALL success?

Both managers all had their embarrassing cup defeats. Wenger v Bradford will always be stained on the memory of Arsenal fans. Graham FA Cup 3rd round defeat to Wrexham in 1992 on his record. Both tiny stains on highly successful careers.

On the darkest sides, both men have bought the club to its knees. Wenger has stayed on too long. His disregard for the fans is distasteful. His arrogance, his refusal to accept anything is wrong, targeting top 4 over trophies.

Meanwhile Graham had that scandal over brown envelopes for transfers which ultimately lost him his job – although I would imagine every manager of the time was getting brown envelopes. Graham just the one who got caught.

One thing not in doubt is that both men love Arsenal Football Club.

Wenger has spoken numerous times that when he retires, he will be a regular at the stadium as a fan. Graham is often at the stadium (although not invited enough by a bitter board) and clearly has Arsenal in his heart.

I recently put some Arsenal wall plates away. I have moved into a new house and just do not have a place for them. You know the ones. Advertised in the back of a magazine. £29.99 a plate. Supposedly for ‘collectors’. One is called The Managers. This is what inspired this article. Why do we have to pick and choose between Graham, Champan and Wenger? We do some feel the need to praise one whilst discrediting others?

You do not often hear people comparing Henry and Wright. Bergkamp and Brady. They might argue who was better, but people do not argue who was worse. But they do with Graham and Wenger.

Why not put your agenda’s, your narratives, to one side and thank god we had Wenger and Graham. We could have so easily ended up with Venables and Gross…

Arsene Wenger and George Graham. Both are Arsenal Legends.

4 thoughts on “Graham and Wenger…Why is there even a debate?”