It is all about momentum.

As previously stated, I am not too bothered about top 4, Champions League football or finishing above Spurs. I am all about trophies. And we have an FA Cup Final to play for. Any run we can put together that builds team confidence between now and the FA Cup Final against Chelsea at the end of the month is a good thing.

Yesterday’s win against Manchester United, with excellent performances from the likes of Xhaka, Ramsey, Koscielny and Holding can only be seen as a positive.

If we can remain unbeaten between now and the end of the Premier League season, we should be brimming with confidence for May 27th. Winning should never be seen as a negative.

I am not in the job of abusing our own fan base. Everyone is free to support the club how they wish. Whether they want to go on protest march’s, back Wenger to the hilt, video themselves for 90 minutes or live their life through Twitter, it is their choice. But one thing I will not stand for his so-called Arsenal fans wanting Arsenal to lose a game so it supports their agenda.

We won yesterday. I was happy we won. I want Arsenal to win every game they play. But I still want Arsene Wenger to leave.

After yesterdays win, there were Arsenal fans unhappy. Angry even, that Arsenal had won. They actually want us to lose every game, including the FA Cup Final, so that Arsene Wenger leaves.

How bitter and twisted must these peoples lives be that they spend all week moaning about Arsenal and Arsene Wenger, then when it comes to game day, they want Arsenal to lose and are unhappy when we win. Why do they even bother with football, with Arsenal. Their unhappiness probably filters through to other aspects of their life. Their wife / husband, their job, their children.

They are the type of fans who will agree with Piers Morgan, tweet him to support their view point, and RT him because he dislikes Wenger. They ignore want the vile man has done previously purely because his views suit theirs.

These people spend all day pointing at Arsenal’s recent poor record against big sides, Wenger’s poor head to head against Jose Mourinho, then when we beat Manchester United, it is dismissed, not as a good win but against a victory against a bunch of Man U kids (it wasn’t) and a Man U side that is no longer a top team.

So let me get this right, you include Man U in your statistics to shame Wenger’s record (and rightly so), but then we we win, you disregard it as it does not suit your agenda?

In football anything can happen. Changing the manager does not guarantee success. So in your mythical, illogical offer, you are saying we are guaranteed a trophy and he stays? I will always take the trophy no matter what.

How can you want Arsenal to lose, when you claim to be an Arsenal fan?

I want Wenger to leave. But I want Arsenal to win. And Arsenal winning is more important than Wenger not being in charge.

What a player we have on our hands here.

Whilst I do not want to go OTT over a 21 year old centre back who has played just 13 games for The Arsenal, it is clear the boy has some ability.

He has recently played in victories over Manchester United and Manchester City and, one poor pass back towards Petr Cech / Laurent Koscileny aside, has not put a foot wrong.

Holding looks to have it all. Strong, aggressive, quick, but can play as well. He now needs to play games. Whether that be for Arsenal or on loan elsewhere, playing 38 games in the Premier League next year is a must for his development.

Personally, I do not think he is quite ready to play week in week our for a title chasing team. A loan move to someone like West Ham, Crystal Palace or Watford – where he could then play 38 games – would have him returning next summer as a 22 year old centre back ready for Premier League football.

Early this season, Arsene Wenger ‘apologised’ that Rob Holding did not cost £45m. A clear dig at the under performing John Stones and that it should never be about the price tag of the player, but about that players ability. There are some crazy price tags for young talents being floated about at the moment (more later).

Holding and Stones could well be the English defensive partnership for a decade. We have got ourselves a steal.

John Stones for £45m. Leeroy Sane for £41.5m. Reports of Kylian Mbappe being available for upwards of £85m. £40m for Borussia Dortmund’s rising star Christian Pulisic. The cost of “potential” seems to be going through the roof.

It started a couple of years ago with how much Manchester United paid for Antony Martial. Bayern Munich spending £35m on Renato Sanches. These are price tags that used to be held for established superstars. Cesc Fabregas, Alexis Sanchez, Eden Hazard. But now it seems you have to pay the premium for what a player MIGHT become, rather than the player they currently are.

Let’s take Kylian Mbappe as an example. Now I am not doubting his potential. He is an extremely talented 18 year old. But when I see £85m – £100m for a player who has started just 16 top flight games is incredible. It is a crazy amount of money for a player who has achieved nothing, proven nothing.

His goals to games might be impressive, but it is over a 6 month period in a lesser league. Arsenal have been heavily linked, but give me the choice between an established Premier League striker like Lukaku or a player with potential like Mbappe, I will always go for the established player.

Pulisic is similar. A crazy price tag for a player with such little top flight experience. Liverpool would be paying more for Pulisic than they paid for Coutinho, Lallana and Roberto Firmino. All 3 are better than Pulisic – who has not even yet started 20 Bundesliga games.

In the past Arsenal have overpaid for the likes of Theo Walcott and Alex Oxlade-Chamberlain, paying the money for what they could become rather than what they are.

2 years ago Spurs got a steal with Dele Alli at £5m. Arsenal signed Rob Holding for £1m. Talented youngsters at the right prices are out there. So many players struggle to make the transition from talented youngster to established global superstar. 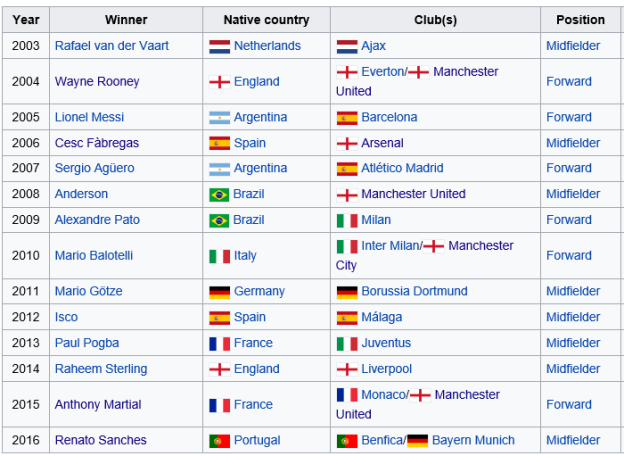 Since Sergio Aguero won the Golden Boy award in 2007, I would say only Paul Pogba has gone on to be truly world class. Others have become establish internationals, but none of them are in that top bracket of global superstars.

Find the value, scout the youngsters that no one else spots, and do not overpay for potential.