I remember a few years ago writing a blog about attendances at Arsenal and Spurs. It was basically questioning why Spurs are building such a big stadium.

The blog was about Spurs struggling to fill White Hart Lane for certain games: 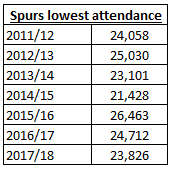 The point I was making in the blog was that if Spurs struggle to sell out for every game now, there were only be more empty seats in a bigger stadium.

I then returned to Arsenal. Even for League Cup games at Highbury, we sold out. And since the move to the Emirates, Arsenal’s lowest attendance (before the Doncaster game) is 46,539, against Shrewsbury Town in the League Cup third round way back on the 20th September 2011.

So Arsenal get near enough twice as many fans turn up for small games than Spurs, but Spurs are building a stadium bigger than Arsenal? It is all just very odd.

When I wrote the original blog, many Spurs fans pointed out that Arsenal’s Stadium is bigger than White Hart Lane. That Spurs can not get 46,539 into their current stadium so it was an unfair comparison.

This argument was stupid, because whilst I would not expect Spurs to have more fans in the ground than their capacity, the point is they are not filling their current stadium.

The Spurs argument was that if they build a bigger stadium, more fans will turn up for the smaller games. If you build it, they will come.

This completely missed the point that every year over the last half a decade, there have been games where 10,000 tickets have gone unsold. They have been advertised at train stations and in the Evening Standard, yet still tickets were unsold.

@fkhanage Spurs' new stadium; It's like buying an extra large condom for a small dick, you can pretend you're big but you're not.

But if the stadium was bigger, more would turn up the window lickers kept shouting at me.

Well on Tuesday Spurs were playing a League Cup game at Wembley. A 90,000 seater stadium. It was against Barnsley. 23,826 people turned up to watch. That is 61,686 less than what turned up to watch Spurs play Bayer Leverkuson last year in the Champions League.

So they built it, but they did not come.

In comparison, Arsenal’s attendance yesterday for the game against Doncaster was 44,064. Nearly twice as many Arsenal fans turned up for a game in the same competition as Spurs.

Of course, Spurs fans will have their excuses. Like it being at Wembley instead of Tottenham – even though hardly any of their fans actually live in Haringey.

They will point to it being the League Cup, yet Arsenal had more turn up, and are they then saying they only want to go to the big games?

The fact is, their new stadium is a vanity project. They are hoping that by building a bigger stadium ,it will elevate them to a top team, a more popular team, and their fan base will grow.

In reality, you only grow as a club, become more popular, with success. And no matter how big Spurs build their stadium, it will not hide the fact that they have won just a single League Cup in 18 years. No FA Cup in 26 years. No league title in 56 years.

It will be hilarious when Spurs play in their new stadium, whether it be next season or the year after. Their League Cup 3rd round tie against a lower league side will just be a case of déjà vu.

It will not see them sell out. It will not even see them get above 45,000. As history has shown, for these smaller games, Spurs only have around 25,000 who actually want to go.

Spurs will always be in Arsenal’s shadow, no matter how big they build their stadium.

A big new stadium does not make you a big club.