What is it about all these fake records the media are inventing? It is getting ludicrous.

Then a year ago, you had an award given to Spurs for “most points over the last two seasons”. They finished 2nd and 3rd without a trophy, but they got the most points over 2 seasons. Well done.

Just at the end of last year, Harry Kane broke the “most Premier League goals in a calendar year” record.

Firstly, it highlights how much these records are made up by the media by the fact that it was a Sky-era only record. Secondly, Alan Shearer held the previous record, of which he was unaware of until 20 years after he “broke” the record.

And now Kevin De Bruyne is a record breaker.

Was the headline. I wondered what record he had broken. It being January and all, it can not be a calendar year record.

I fully understand why all these records are being created by the media.

In an era of 24 hour news, revenues driven by advertising rather than buyers, media outlets need the clicks, the listeners, the watchers.

This leads to the dumbing down of the media. A picture of Kim Kardashian with her arse hanging out will get more hits than an investigative article into the corruption of unions in the UK. This clickbait thirst has led to the rise of fake news.

Football fans have dealt with fake news for decades.

And this leads back to fake records and awards.

Young journalists trying to break through in the industry are not KPI’d on the quality of their articles but their quantity. I know someone who works in the field and they have to write 3 news articles a day.

Eventually they get to the point where they are literally making stuff up just to fulfil the 3 articles a day. They create these records to give themselves something to write about.

Then these articles are picked up by other junior journalists who basically rip off the original article to complete their daily quota.

Suddenly every media outlet has picked up on the fake record, and is reporting on it. Then it hits social media (although chances are the originator stole it off someone else) and the record becomes a “thing”.

I watch cricket and they come up with records as tedious as Highest 6th wicket, 2nd innings partnership for England at Melbourne. The difference is cricket is a game for statistic geeks.

The final nail in the coffin for this blog was the award the Daily Mirror gave to Spurs: 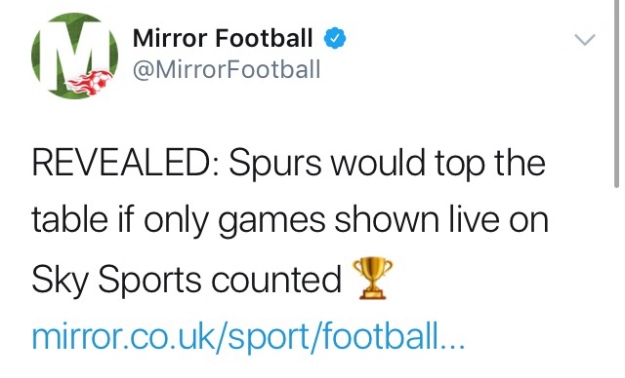