Attendance: A maximum of 300 attendees due to UK government coronavirus restructions

For the first time since the one-nil victory over West Ham United on Saturday 7th March, we find ourselves finally playing a home game in the Premiership, even though none of our wonderful supporters will be present in the stadium to witness this evening’s match, sadly. It goes beyond words to state that every point is precious now, and each man must play their part for the club until the end of this topsy-turvy season. Our visitors tonight may well be currently residing at the bottom of the Premiership table, but that does not mean that should they should not be taken just as seriously as anyone else who plys their trade in the Premier League. Great to see young Reiss Nelson getting a start tonight, as well as Cédric Soares included as part of the substitutes’ bench too; this shows good intent and a real desire to change things around by Mikel Arteta. Nothing more than a victory tonight will do.

Arsenal certainly got the best of the early exchanges, and although Norwich were on the back foot, they certainly didn’t crumble under the relentless pressure from our forwards. Pierre-Emerick Aubameyang got the first shot on target after ten minutes, and it became apparent that we had everything under control so early in the game. Hector Bellerin and Kieran Tierney were working the wings very well, moving into the spaces that Norwich had kindly left open for our speedy wing-backs to exploit. After twenty minutes, our defenders sloppily left just enough space for Ben Godfrey to hit the post from circa thirty yards with Emiliano Martínez grasping for air, and after the drinks break, we took control of the match again. David Luiz was unlucky not to score from a thirty-yard free kick on the half hour, and by now it was looking like we would be the first team to score. Tim Krol made a horrific error on the edge of his area; Pierre-Emerick Aubameyang blocked the ball, then simply took the ball around him and with the most simplest of tasks, put Arsenal one-up on the night. A few minutes later, David Luiz placed a long ball over to Pierre-Emerick Aubameyang on the left, who quickly slotted the ball to Kieran Tierney. He took the ball to the byline, and crossed it for Granit Xhaka to finish the job and score our second goal of the night. In injury time, Emiliano Martínez made an acrobatic save to deny the vistors a goal; the subsequent corner led to nothing, and so we went into the break comfortably in the lead, overall.

Rob Holding replaced Shkodran Mustafi for the second half, and although Norwich started to wake up a bit, with one or two excitble chances, Arsenal were hardly bothered, to be fair. We contained the visitors very well, and we found that the best way to deal with them was to play a high pressing game, but in doing that, we left one or two spaces at the back, which Norwich tried desperately to capitalise on. Joe Willock replaced Reiss Nelson after fifty-seven minutes, and in doing so, changed the shape of the team by moving Alexandre Lacazette up with Pierre-Emerick Aubameyang to make a double-pronged attack on the Norwich defence. The visitors had a tepid penalty call, which was denied by the VAR team at Stockley Park; good to see them get something right for a change. Joe Willock blasted a ball over the bar from just inside the penalty area, then Pierre-Emerick Aubameyang got our third of the night after sixty-seven minutes following another dreadful defensive error from Norwich, and with fifiteen minutes left, Hector Bellerin and Alexandre Lacazette were replaced by Eddie Nketiah and Cédric Soares to get fresh legs out there for the remainder of the match. Cédric Soares, on his debut, blasted Arsenal’s fourth goal of the night from twenty yards, and two-goal Pierre-Emerick Aubameyang was substituted for Nicolas Pépé with nine minutes remaining. By now of course, the job was done, and the rest of the match was simply one of containment on our part.

There’s nothing like a good win to put a smile on everyone’s face, and with three wins in a week, life is good. Everyone played their part tonight, Pierre-Emerick Aubameyang was in unbelievable form, whilst Emiliano Martínez pulled off some fine saves to prevent Norwich getting on the score sheet. Our debutant Cédric Soares scored a dream third goal, whilst David Luiz, it has to be said, was superb at the back. Oh, and we are a point above Spurs in the table too! Saturday’s match against Wolves at Molineux will be a better test for us, but with the confidence that tonight’s win under our collective belts can give us, who knows? Remember everyone, keep the faith, get behind the team and the manager, as this season is going to be crucial for our future success in all competitions. Stick with the winners. Our next match: Wolverhampton Wanderers at Molineux Stadium, Waterloo Road, Wolverhampton WV1 4QR on Saturday, 4th July at 5.30pm(Premier League). Victoria Concordia Crescit.

With all the Coronavirus hysteria, things are changing almost hourly.

We could wake up tomorrow to find a decision has bene made to play the game behind closed doors, or that it has been postponed.

Arsenal’s mid-week game against Manchester City was postponed following the Olympiakos owner being tested positive for coronavirus earlier in the week.

This resulted in the self-isolation of anyone that had come into close contact with him within 14 days of the positive test. Numerous Arsenal players and staff members who told to self-isolate, which came to an end yesterday.

According to the BBC, just 5 players went into self-isolation, having been in contact with Evangelos Marinkis in the tunnel after the match. No player was tested.

We are in a fluid situation and things are changing quickly.

Whilst the UK has not followed France and Italy’s lead by banning mass gatherings, it will not be too long until this happens as cases continue to rise.

My advice is do not book trains for away games.

In 9 days time, we play Sheffield United away in the FA Cup. Anyone booking trains now must be prepared to lose the cost of their ticket if the game is postponed, or played behind closed doors.

It might be frustrating, but the train companies have no right to refund people for cancelled events, and clubs also have not liability towards fans who have paid out for trains or hotels.

For the foreseeable, plan to take private transport rather than public.

Get together with your mates and drive to games, or hire a mini bus if there are more than you. Alternatively contact The Mini Bus Crew, they always have seats available.

Staying away from public transport at least means if a game is cancelled, you do not lose the cost of a train ticket. Even f it means driving to a game and not being able to drink.

If you do decide to book trains, flights or hotels, that is your choice. You have accepted the risk. And you can not really moan if you end up losing your money.

Hopefully tomorrow I will be getting on a train to Brighton (will buy train tickets on the day) and the disruption this week does not affect the players too much.

Victory would see us go just 2 points behind Manchester United in 5th.

(Note: This blog was written prior to the Mikel Arteta news)

My Arsenal v Manchester United preview spoke about how the result could make or break our challenge for a top 4 place.

The 2-0 victory leaves it very much in Arsenal’s hands to finish top 4.

Prior to the weekend, very few would have thought that Tottenham would have lost to Southampton and Chelsea would have got just 1 point at home to Wolves. But that is what happened.

Prior to the weekend, Chelsea’s game in hand made me fearful. A win would put them 2 points ahead of Arsenal.

But we won, Manchester United lost and Chelsea drew. Also Tottenham lost to Southampton which drags them back into it.

Even if Chelsea win their game in hand, Arsenal are still 4th. There would be just 3 points covering 3rd to 6th. 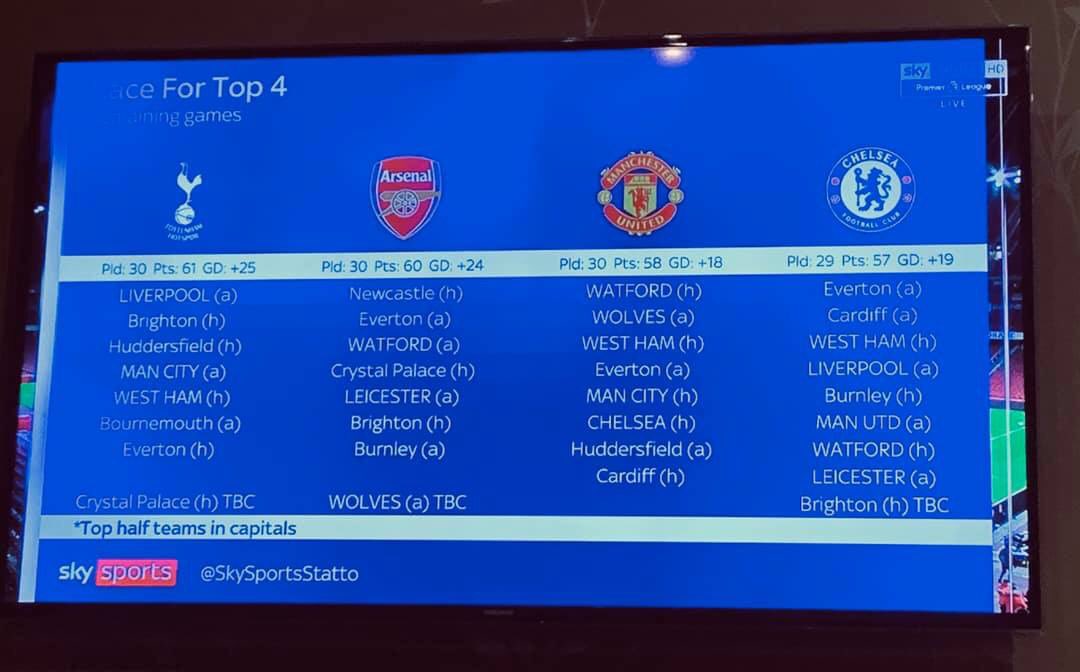 The wheels are coming off Tottenham.

Just over 2 weeks ago they were 10 points ahead of Arsenal. They could fall out of the top 4 next weekend if they fail to get a result away to Liverpool.

They are without a win in 4 games, and their only point came courtesy of a 90th minute missed Pierre-Emerick Aubameyang penalty.

With games against Liverpool and Manchester City to come and tough home games against West Ham, Everton & Crystal Palace to come, it is hard to see Tottenham getting more than 15 points. That would leave them on 76.

Manchester United are still to face Manchester City and Chelsea at home.

They were on a great run under Ole without really playing a top team. Like Arsenal’s 22 game unbeaten run, it will be interesting to see how they respond. Like Tottenham, they will probably not be too far from the 76 point mark.

Chelsea have the trickiest of run ins, although they do have a game in hand.

They will do well to get points from trips to Manchester United and Liverpool, and also have tricky trips to Leicester and Everton.

Their draw at home to Wolves shows how fragile they are. I think they will struggle to make the 75 point mark.

Only once in the history of the Premier League has a team amassed 75 points and not made the top 4 – Arsenal in 2016/17.

To put that into perspective, Arsenal finished 2nd the season before with just 71 points.

The issue Arsenal face is we only have 3 home games left – Newcastle, Crystal Palace & Brighton. We need 9 points from those 9 games.

We have dropped just 7 points at home in the league this season – 5 of which were to Liverpool and Manchester City. It is not unreasonable to expect Arsenal to win all 3 of those games.

It is the 5 away games that will be key.

Arsenal are 9th in the Premier League away table with just 5 wins from 14 games. Although it has to be taken into account that 5 of the 14 away games were against sides in the top 6.

If you take games against the other top sides out of it, our away form reads a lot more favourable:

If we mimic this form in the 5 remaining away games we should get 9 points. If we add the 9 points from 3 home wins, that would leave us with 78 points in total.

From those 5 games, even if we end with 2 wins and 1 draw, that takes us to 76 points as long as we win those home games.

Ultimately it is winning those home games that is important. Do that and top 4 is ours. Maybe even 3rd.