Sky TV and the Premier League. If I had to pick a date when football as we used to know and love it started to go down hill, it would be 1992.

It was at this point, top division clubs decided to go it alone. To break away from the Football League and set up the Premier League. It was at this point that clubs became more interested in the money they can make, rather than look after the loyal fans who stuck around when football was not as popular as it is now.

And hand in hand with those Premier League club was Sky TV, Sky Sports, BSkyB or whatever they wanted to be called back then.

A lot of what I hate about football these days is due to Sky and the Premier League.

The disconnection of players to clubs, the boasting about “mega money TV deals” whilst ticket prices continue to rise, and kick off times. Those bloody kick off times.

But perhaps the most annoying thing that Sky TV and the Premier League done is white wash anything that became before it.

I hate it when Sky completely whitewash anything before they came along. This is a prime example pic.twitter.com/cjEu9MDMOU

The Premier League is actually no different to the old First Division. Bar the trophy and greed, it is still the “Top flight of English football”. It is why it always baffles me when people talk about “Premier League records” as if football did not exist prior to 1992.

Sky ignore anything prior to the Premier League because they do not have the rights of the footage. Greed means that they refuse to pay the BBC, ITV or whoever owns the footage of games in the 80s, 70s and earlier.

It was actually hilarious that after Sergio Aguero scored his memorable goal against QPR a few years back, that Sky promoted it as “the best end of the season. Ever”. It completely ignored 1989, Arsenal at Anfield.

Even a neutral will say that Arsenal beating Liverpool at Anfield was a greater finish to the season that Manchester City beating QPR.

And the above graphic is hilarious. Apparently now, the 10 league titles Arsenal won prior to the Premier League count for nothing.

Some people might say “stop living in the past, history does not matter”. Yet according to Sky’s graphic, Arsenal’s table topping sides of 1989 and 1991 are meaningless, whilst Manchester United winning the league title in 1993 can be counted.

The majority of fans can see through this. But sadly this is starting to change. You read about Manchester United fans mocking Liverpool fans for “never having won the Premier League”. Chelsea fans boasting about how they are the “second most successful team in Premier League history.”

The reality is Chelsea are still behind Everton, Sunderland and Aston Villa when it comes to league titles.

I guess it is not a surprise that two clubs as unsuccessful as Chelsea and Manchester City only care about “Premier League Era” results because it makes up for their lack of success in the previous 100 years of football.

The worry is that with Sky pushing the “Premier League” agenda and football becoming more influenced by foreign fans, that achievements prior to 1992 will be deemed meaningless in comparison. 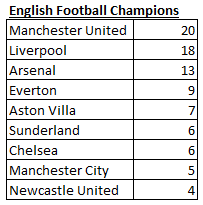 Sky need to stop disrespecting the history of the game just because they do not hold the rights to the highlights.

Ps: Some Arsenal fans will bash this article saying I am “living in the past”. They might be true, but these same fans probably also moan every day on Twitter about Modern Football. Maybe some people just like to moan?