You have to wonder if Koscielny will be seen again in an Arsenal shirt.

That was my thought process in an article I wrote after the Europa League defeat to Atletico Madrid.

Laurent Koscielny’s troublesome Achilles once more reared its ugly head. Crumpled on the pitch in extreme pain, he was forced off after just 12 minutes. Immediate diagnosis was that he would be out of the World Cup.

Soon to be 33, I felt at the time it could keep him out longer, and so yesterday’s prognosis that he is set to be out for 6 months is not surprise.

“You will not see him until December at best,” said Wenger.

It pretty much rules the Frenchman out until 2019. At that is best case scenario. As we have seen with Santi Cazorla, any sort of surgery on your Achilles can lead to further complications. Even if he returns in December, he will only have 18 months left on his contract.

By the time that contract expires, he will be 35. This is almost certainly his last contract with Arsenal.

He has already spoken about wanting to see out his career at Lorient, and even before the injury, I felt that his Arsenal career was coming to an end. That he perhaps only had 1 more year left in him at the top level. 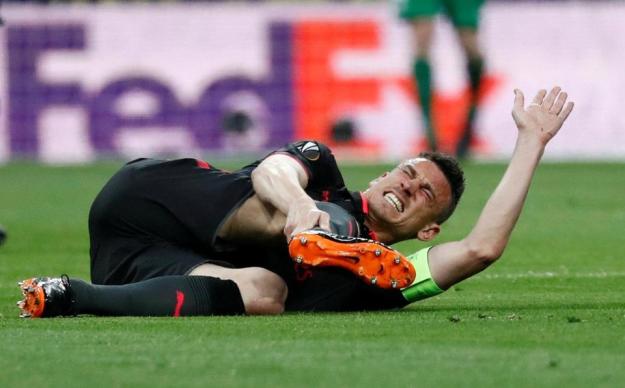 Whilst I do feel for Koscielny, this long term injury could actually be good news for 2 reasons for Arsenal.

The first (and lesser) reason surrounds the captaincy of the club.

For too long, the captain of Arsenal has been messed around with. Since Patrick Vieira left us back in 2005, the only consistent player we had as a captain was Cesc Fabregas – who led us for 3 years.

Robin van Persie was given it to try and encourage him to sign a new contract, whilst in recent years with the likes of Thomas Vermaelen, Mikel Arteta and most recently Per Mertesacker barely captained the team on the pitch.

The concern going into next season was that Laurent Koscielny was going to be the natural successor to Per Mertesacker, as the current vice-captain and senior professional in the team.

That concerned me as I felt he only had 1 good year left in him, and even next year he might not be guaranteed to start week in week out (if we sign a top centre back). That would leave us in the exact same position that we have been in recently. A captain who does not always play.

With captaincy off the table for Laurent Koscielny, it naturally gives the club a chance to look a bit longer term. Give it to someone who will be captain for the next 5 years, not just the next 12 months. If Aaron Ramsey signs his new deal, he is the man for the job.

The second reason is that Koscielny’s injury will force the clubs hand in the transfer market.

We needed a centre back last season. Instead of signing the player we needed, we stuck with Koscielny and Shkodran Mustafi, with Per Metesacker and the youngsters Rob Holding and Calum Chambers backing him up.

After Konstantinos Mavropanos performances in the later end of the season, it would have been an easy option for the club to say “lets stick with Mustafi and Koscielny, with Holding, Chambers and Mavropanos backing them up”. This would have been a disaster.

Koscielny is clearly on the wain. He has always been error prone, but more mistakes seem to have crept into his game in the last 18 months. As for Mustafi, there are question marks over whether he will ever be good enough.

Had we gone into next season with Mustafi and Koscielny as our centre back partnership, it would have led to another season of disappointment. Now the club has no choice but to go into the market and sign a senior centre back to partner Mustafi.

Whilst the injury is bad news for Koscielny personally, it is great news for Arsenal as we can moved forward into the new era post-Wenger with a new captain and new centre back partnership.

As always please RT, if there not for you they maybe for someone who follows you. pic.twitter.com/K0ImaN9l9D

My Tweets
Join 98,898 other followers