He became the forgotten man during all the speculation about who to replace Arsene Wenger.

All the talk was about Allegri or Arteta, Enrique or Rodgers, Lowe or Ancelotti, but the name we ended up going for was one which, before news began to break yesterday morning, had been forgotten about.

By now you will have remembered about the man who is to become the next Arsenal manager. Unai Emery.

I really do not know why he exams forgotten about this summer. He has been on many of our short lists to replace Wenger for some time, but he had barely got a mention until this week started.

Emery first made my list way back in 2014, before I was even trying to blog. Arsenal without a trophy in 8 years, the man from the Basque Country had only recently joined Sevilla.

With the financial restraints Arsenal were under at the time, the young manager looked an excellent option. Memory went to his 3 consecutive top three finishes in La Liga with Valencia.

A fabulous achievement on a tiny budget whilst having to continually sell his top players – the likes of Juan Mata and David Silva.

Success for Arsenal followed that season with the FA Cup, leading Arsene Wenger to sign a new deal.

At Sevilla success also beckoned, as Emery led his side to the first of what would be an historic 3 UEFA Cups in a row.

In March 2016, the discussion about who to replace Arsene Wenger reared its head in my consciousness again. And once again Emery made my short list: 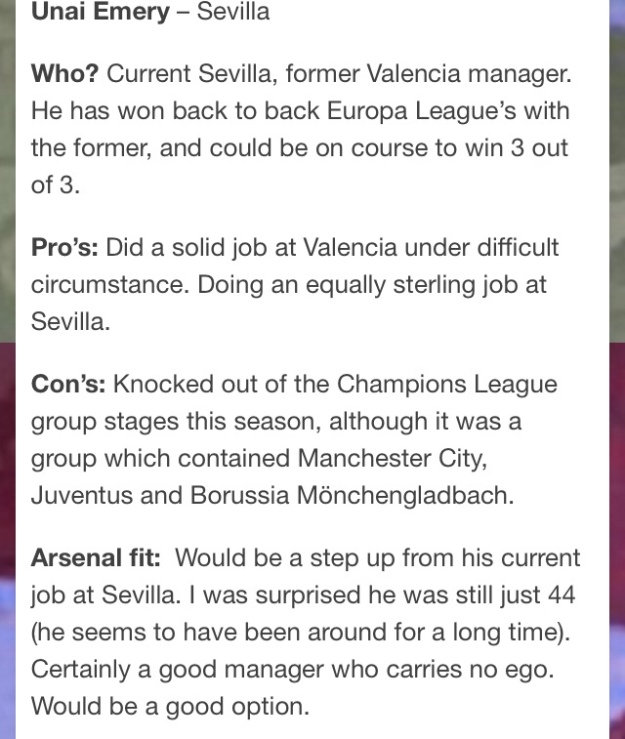 November of the same year, I revisited my list.

“He joined PSG this summer, which might mean replacing Arsene Wenger next summer might be too soon. But he is certainly one to keep an eye on.”

18 months after those comments, and we have secured the man who at the beginning of 2017, was in my top 3 for the Jon.

But then I have not spoke about him in 2018. He was certainly forgotten.

People will point to relative failures in France with PSG. Monaco winning the league in his first year.

But can parallels be drawn with Pep Guardiola?

He failed to win the Premier League with Manchester City. And despite spending £400m, has only taken them as far as the Champions League Quarter Finals.

At PSG, he was knocked out by Barcelona and Real Madrid. And his failure in his first season in France saw Monaco hit an incredible 95 points, losing just 3 games, drawing 5.

Unai Emery won three Europa Leagues on the bounce with Seville, then a treble with PSG, but is being disregarded because he didn’t win the ECL? Pep hasn’t won it since he left Barca, and his City team cost more than PSG’s – does that mean he’s not a top coach anymore? 😂

He won 3 Europa Leagues in a row with Sevilla, despite huge financial constraints

5 trophies in 2 years at PSG

Great appointment by Arsenal. Even if most of us had forgotten about him.

My thoughts on Unai Emery earlier this season. Should 100% be in the frame for next Arsenal manager. pic.twitter.com/gmPhPcU6Uh