At the time of writing (Tuesday morning!) Arsenal have 30 players listed on Arsenal.com as senior players. And this is before the incoming Dani Ceballos and Gabriel. Both of which will be confirmed over the next 7 days (unless already done so by the time this is published).

Ceballos and Gabriel joining the club will take it to 32 senior players.

Regardless of Premier League squad rules, 32 senior players is too many.

But then when you take into account Premier League rules:

A lot of people often get the rules wrong, thinking that you have to name a minimum of 8 home grown players. You do not. You could just name 17 non-home grown players and fill the rest of your squad with U21s.

So when looking at the Arsenal squad for 2020/21, we need to take into account: 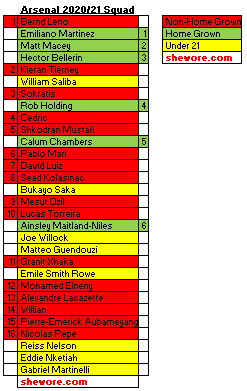 So before Gabriel or Ceballos is confirmed, we have:

This means that under PL rules, we would be fine submitting the squad “as is”. Although this does not remove the issue that 30 senior players is about 5 too many.

But then you add Gabriel & Ceballos to the squad. Both of whom would be registered as non-home grown. That takes Arsenal to 18. 1 too many (and 32 first team squad members).

Straight off the bat, Arsenal would have to sell (or loan out) 1 senior player.

But that only brings the non-home grown element of the squad down to 17 – the maximum we are allowed.

So we need to start seeing departures to offset those coming in.

Just to accommodate both Gabriel & Ceballos, we need to sell one. Then if we added Thomas Partey, Houssem Aouar or Coutinho, we would basically need to sell “like for like”. With Lucas Torreira, Mohamed Elneny or Mesut Ozil leaving to make space.

Remember, Matteo Guendouzi is U21, so selling him will not free up a squad place.

We could not go and sign Thomas Partey and Houssem Aouar and sell Lucas Torreira and Guendouzi to make space. We would have to shift someone other than Guendouzi.

So for non-home grown purchases, if we sign Gabriel, Ceballos and 2 more, we would have to sell (or loan) 3 non-home grown players to stay within the rules (or as someone pointed out, we could just not register Mesut Ozil!).

But selling “like for like” would still leave Arsenal with close to 30 first team players. At most we need 25/26.

Now before some smart arse says “you can only have a squad of 25”, remember, U21 do not need to be registered.

So looking at the squad, Arsenal will need to sell or loan out at least 8 players if they wish to make 4 purchases. This ensures they stay within Premier League squad rules and reduce the bloated squad.

That 8 names on the lsit are fairly clear and obvious, with only Shkodran Mustafi perhaps being sold ahead, or as well as, Chambers and Holding.

Arsenal would also be watchful on 2021/22 when the likes of Joe Willock, Reiss Nelson and Eddie Nketiah have to be registered as will no longer be U21.

So expect 8 sales (or loans) to occur before the transfer window shuts on 5th October, as old players make way for new.