Whilst Alexis Sanchez will get all the praise after his performance against West Ham, followed by Alex Oxlade-Chamberlain, one man could also walk off the pitch with his head held high. Gabriel Armando de Abreu, known as Gabriel Paulista or simply Gabriel.

With Hector Bellerin out for a few more weeks yet, Mathieu Debuchy joining him in the physio’s room, and Carl Jenkinson’s demise, Arsene Wenger took the decision to play Gabriel at right back against West Ham. 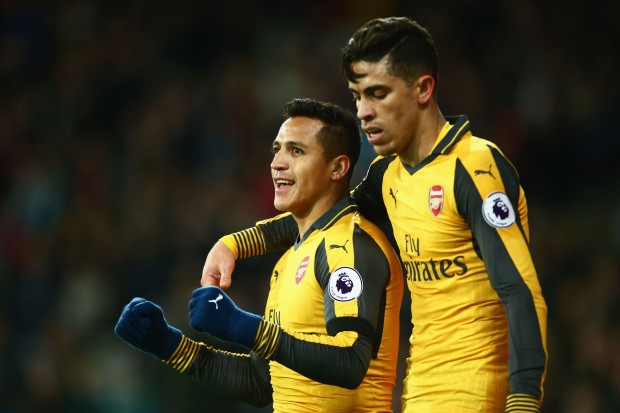 The more natural solution would have been move Shkodran Mustafi to right back – who has played their previously for club and country – and put Gabriel in the middle of the park. But Wenger decided it was better to keep the middle strong, and put Gabriel on the right. Rather than have two weakened positions, it meant just one.

It also meant that inside Gabriel there was the class and reliability of Mustafi.

Gabriel did a brilliant job against West Ham. Only once I can think he was beaten, and as the game went on he showed some attacking intent.

Obviously he is not a long term option there, and the quicker Bellerin returns the better, but good job Gabriel, bloody good job.

As you open your 5th door on your advent calendar, November is already a distant memory away as we look forward to Christmas. And with November over, it meant Arsenal could finally returning to playing title challenging football.

Arsenal’s poor November form has been highlighted by all and sundry. So how did the team actually fair in the horrible month?

In the Premier League, we were actually unbeaten. Winning 1, drawing 2. But it saw us drop from top of the league to 4th.

November also saw Arsenal knocked out of the League Cup by Southampton, and almost certainly resign themselves to 2nd in their Champions League group after a draw at home to Sunderland.

5. Arsenal have already scored as many Premier League goals in December as they did in the whole of November.

If the 16 year old’s name rings a bell, it is because he is the son of Arsenal under-18s Head coach Kwame Ampadu.

So the reality is it is a bit of non-story.

Before joining Arsenal, Kwame Ampadu was the U18’s coach at Exeter City. It was at this time the younger Ampadu joined the academy that his father was working at. When Kwame came across to Arsenal in 2012, Ethan, then 12, remained in Exeter, at school, and training with the local club.

Role on 4 years, Ethan is 16, finished his secondary schooling, and has not joined his father at a bigger, better club.

Ampadu became the club’s youngest-ever player when he made his debut aged 15 years and 331 days old in August, breaking an 88 year old record set by a chap called Cliff Bastin. He was recently named Wales’ Young Player of the Year.

A defensive midfielder, it will be interesting to see how quickly he establishes himself in his fathers under-18 side

The draw for the FA Cup 3rd round is tonight, around 7.10pm. It will be live on both BBC Two and BT Sport. Arsenal, as always, are number 1.

For a long time, I have been a slave to statistics, and will continually to rely on them alongside my own eyes when judging players. They are so important as statistics in themselves can not be biased.

However, the way an individual interprets statistics can be biased.

We have seen an example recently with many people rolling out the following statistic:

It is a damning statistic which does highlight a massive underachievement. Just a 4.4% win ratio. But then it is also a biased statistic as it deliberately creates a time period that to make Wenger look bad – after the 2005 FA Cup victory to today.

Let’s flip it another way:

The period picked was from the FA Cup victory of 2014 to today. This creates a win ratio of 18.2%. Vastly improved!

Of course, the longer the time period, the more accurate the statistics:

That is his record during his entire time at Arsenal. 11% of all trophies. 9 from 82 does not seem much. But then look at this:

That is the statistic since the end of First World War.

Since the Great War, Arsenal have won 11.1% of all trophies (League, FA Cup, League Cup & Europe) that they have entered.

So what can we actually conclude from these statistics:

Statistics can be interpreted however you wish, to either prove an argument or disprove it, to credit someone or discredit someone.

A few weeks ago we gave you some cracking Christmas present ideas for Arsenal fans. We have since had these come in…

Coasters…on the shop now, will be despatched straight away. Sold in sets of 4…only 24 sets as sample product.https://t.co/WPQPMCivuh pic.twitter.com/1q6RSBIZJq

PS: The deadline for buying a Clockend Clock and having it delivered before Christmas has now gone. If you order one now, you will not get it until January.