This morning on Twitter, Arsenal legend Kenny Sansom announced that he will be on the Jeremy Kyle show “for a ‘celebrity intervention’ special”.

Morning Twitter. I'll be on @itvjeremykyle this morning for a 'celebrity intervention' special. Have a watch! pic.twitter.com/jyamccUPW8

Now for people of a certain generation, Kenny Sansom is their hero. A true Arsenal legend. They grew up watching him.

394 games over an 8 year period, he has a place in most Arsenal fans heart, and many Arsenal fans all time XI.

But we are at a crossroads again with Kenny, and it once again gives me mixed feelings.

In 2013, he sold himself to the Sun on Sunday. It was their first paper on their relaunch after the News of the World phone hacking scandal. And Kenny was their world exclusive front page news.

“I just don’t want to live” he was quoted as saying. He went on to discuss how he had lost everything. His wife, his money, his family.

It was a sad interview highlighting the fall of a great.

At the time, whilst I felt for the man, alcoholism is an awful disease that has taken members of my family, I felt that he was also going about it the wrong way. Selling his story to the gutter press rather than seeking help. I questioned how much money he got for the interview, how much help The Sun would give him, and whether is payment would go straight behind the bar in a pub.

Low and behold, 2 years later, he was in the papers again. 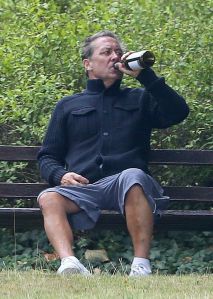 Despite rehab, he was pictured on a park bench swigging from a bottle of win.

Recent reports say that Kenny is in good health.

His appearance today on the Jeremy Kyle show stinks of attention seeking. Another easy pay day.

If he needs help, he should seek it in private. He has family, he has friend. The club have bailed him out numerous times. I am sure Tony Adams Sporting Chance Clinic would be more than willing to lend a hand.

What he should not be doing is selling his should again. Going on a programme like the Jeremy Kyle Show. It is gutter. He should not stoop that low.

Also, a final thought, recently I saw him at a pub for a book signing. Really? Surely we (and he)should be more responsible then this? Inviting an alcoholic to a pub…

Kenny, you do not need to behave in this way.

Something has bugged me for a few weeks now. Something which I wanted to blog about, but wondered if it was too insensitive or would be too far against what many people want to read, that something is with regards to Arsenal legend Kenny Sansom.

Then the news about Kenny Sansom being an alcoholic broke. I had a massive issue with this at the time, the reason being this ‘World Exclusive’ of Sansom’s cry for help, appeared in the very first Sunday edition of a well known tabloid. I took this original story with a pinch of salt, wondering how much Sansom was paid by said tabloid to ensure it had a massive World Exclusive on its first edition.

My frustrations with the Sansom situation increased, as no sooner had he come out (for the 3rd time in the press, no less) as an alcoholic, another Twitter account appeared, with it’s Bio being:

“An account created to show support for suffering alcoholics & homeless. Inspired by my uncle Kenny Sansom to help others like him that aren’t in the public eye.”

How sick in the head must you be to set up a Twitter page about a family member who is an alcoholic? Anyone who has dealt with an alcoholic family member (my family has a history) knows your 1st thoughts are with helping them. Clearly in this case, family members see it as a way to increase publicity. Maybe it is this exploitation of Sansom which drove him to drink to begin with?

The final straw for me came when Kenny Sansom begun his own Twitter account. It became clear immediately that it was unlikely that it was him tweeting. The tweets were in the same childish manner as the previous accounts, set up by his nephew. Was this a coincidence? Was this his nephew giving advice? Or was it his nephew once more using his Uncle’s great name to grow his own ‘popularity’, increasing his own attention, living his life through Kenny?

On his account, Kenny begged the attention of other ex-players. Continually tweeting them, begging for RT’s. I begun wondering once more, whether this was Kenny himself, or his nephew hoping to open up dialogue with the likes of Ian Wright, Lee Dixon, et al.

Most recently, a tweet from his account made me disgusted that it became the straw that broke the camel’s back:

“It’s Ben. Kenny’s really down & struggling big time having fallen off the wagon a few times. Trying to find some ideas to pick him back up?”

This is exploitation. Kenny’s name, his illness, is being used by those around him. His family should be helping him fight the battle, not making his dirty laundry public at every opportunity.

Yes, alcoholism affects a lot of people, and those who suffer from it need to seek help, but they also need to help themselves. What they do not need is to be exploited by those closest, their family, for the sole reason of gaining followers.

Kenny, turn Twitter off and tell your nephew to stop being an attention seeking prick. The Arsenal are with you every step of the way. Other’s are simply exploiting you.