All is bright in the Arsenal world. The sun is out, the sky is blue, and Santa Clause is dusting down his sleigh. Yet some people still feel the need to moan.

We won away from home in Europe, on a cold night in Bulgaria, against a bunch of chicken farmers, after going 2-0 down, yet still some people moan.

After 4 games in the Champions League, we are guaranteed progression into the last 16. Still two games to play, a chance to rest and rotate before other big games, yet still some people moan.

Mesut Ozil scored a cracking goal, a moment of genius, an 88th minute winner, and yet still some people moan.

DWWDWWWWWWWDWWW, and yet still some people moan.

How can people be so unhappy with Arsenal at the moment. We are 2nd on goal difference in the Premier League, in the last 16 of the Champions League, and through to the quarter final of the League Cup.

I do wonder about our fan base at times, the moaning, the constant moaning, with some it never stops. Ozil scores a brilliant goal, yet people still do not rate him, people still moan that he did not perform against Chelsea 3 years ago. How are people this unhappy. ALL THE TIME.

Sometimes I do not understand why some people are “into” football. All they do is moan. They don’t go to games – pretending to boycott when the reality is they have never gone – they do not celebrate victories, they moan that it is just The FA Cup and they are usually sitting there, in front of Sky, on their own, moaning about modern football, whilst watching Sky. The irony of it.

Seriously though, why do they bother with football? Their incessant moaning about the game becomes depressing. It gets to a point where you have to question if they actually like football, or if they are rugby or cricket fans just trying to slander the Great British game.

Maybe, and just maybe, there hatred for football is down to a deep down insecurity within themselves. A belief that they are not good enough, that they have failed in life, they trying to deflect their negativity onto others. I guess at least moaning about football every weekend stops them going home and beating their wife.

And that is the saddest part, many of these moaners have wives, they have kids. They would rather spend their time in the company of a domestic abuser like Justin Lee-Collins then spend time supporting their team, loving their family. Oh well. Let them be them. It is them who will die unhappy, alone, probably of diabetes after eating too much due to their depression. 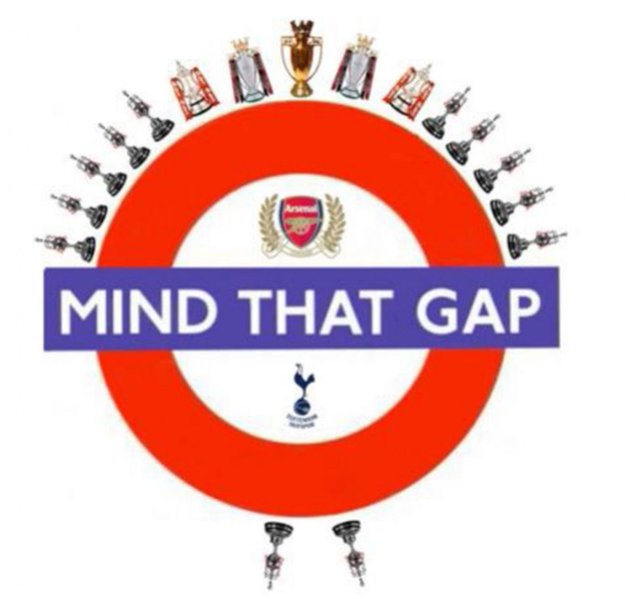 Talking of unhappiness, this weekend we play that lot up the road. The great unbeatable Spurs team of 2016, who, as it stands, are a massive 10 games unbeaten. They are on the road to glory. Their eyes have seen the glory. At this rate they are on course to destroy Arsenal’s unbeaten season. Destroy the top flight record of 49 undefeated. And yet they are 5th.

Imagine that, the best start to a season this millennium, 10 games without defeat, and your are 5th. Still below The Arsenal.

All of Spurs fans are pretty much like that moaning Arsenal fan we described earlier. Lonely, insignificant, hoping their pal does not pull on a night out again as it will mean going into Yasar’s again on their own. Ordering meat and chips, before throwing half of it on Forest Road in a fit of anger.

So insecure are Spurs that they have planned to build their stadium with a dozen more seats than Arsenal’s. It is the equivalent of your enemy buying a slightly bigger house than you, even though they can not afford their repayments.

Spurs are the club who are currently attempting to buy the naming rights to a station near their ground. £12million it is reportedly going to cost them. All because in 1932, 84 years ago, TFL renamed Gillespie Road Arsenal Station. Imagine being that bitter, that twisted. Only an Arsenal fan who still hates Ozil can know how that feels.

Spurs could build a new stadium twice the size of Arsenal’s, they could rename the North Circular “The Tottenham Way”, and yet we still would have won 13 league titles, them only 2.

Spurs are your ugly mate. Currently every night he is pulling a bird. But he never takes her home. Always home alone. Meanwhile Arsenal are efficient. We struck out 3 months ago, but pretty much every weekend since then, we have got our end away. Yet our pal will still mention that one time they pulled, and we did nothing. It doesn’t matter that we were under the whether, it doesn’t matter that he has been in our shadow since we were kids, he will just keep reminding us of that one time in August we did not pull, and he stuck his tongue down the throat of slaggy-Tracey from Waltham Abbey. Everyone else has already been there…

There really are a joke of a club. There greatest player of recent years, Harry Kane, is an Arsenal fan, and everything about them stinks of desperation. Of wanting to be Arsenal.

I bet if you went up to Kane tomorrow and said “Oh, H, come play for Arsenal for nothing” he would jump at the chance and his Arsenal family, and Arsenal brother, would be so proud of him. He could then sit on the bench with Carl Jenkinson discussing who had the most Arsenal memorabilia in their bedroom growing up.

So what do moaning Arsenal fans and Spurs have in common? They are both insignificant specks in the footballing universe who think they are more relevant then they are.

Not too many sleeps till they get a pasting.

5 thoughts on “What do moaning Arsenal fans and Spurs have in common?”