Last night Chelsea won the league. Fair play to them. Well done. They were the best team in the league, but I wake up this morning to see that Sky and the Premier League are at it again. They are rewriting history.

In England, the FA Cup was founded in 1871. The Football League in 1888. No country has a grander, longer history of the game than us. We are the originators. The forefathers. It is something to be proud of. But time and again, Sky Sports have attempted to rewrite that history.

Alongside the Premier League, over the years they have tried to promote “Premier League era only statistics.” IE since 1992.

The key reason for this is commercial. Sky hold very few highlight rights for anything that happened before this time. So they continually show more recent events, events that they do not need to pay extra for.

They are in hand with the Premier League, who in 1992 decided to ‘break away’ from the football league, and have spent years building up the Premier League brand, and disassociating themselves with what went before.

With both in collusion with eachother, they have been able to brainwash many fans, usually younger who did not know football before 1992, to disregard anything before that date as pointless.

We saw it a few years ago when Manchester City won the league title with the last kick of the game. Sky Sports billed the event (and reported it after) as the closest title race in history, and the best end to a title race. They have since continually shown the footage of Sergio Aguero’s goal. It completely ignores Anfield 89.

Last season Leicester won the league. Greatest story in English football was what was written. Really? Is it a greater story than Nottingham Forest in 1977/98 under the great Brian Clough who got promoted, then the next year won the First Divison Title, and the year after the European Cup? I do not think so.

So we go on to Chelsea… 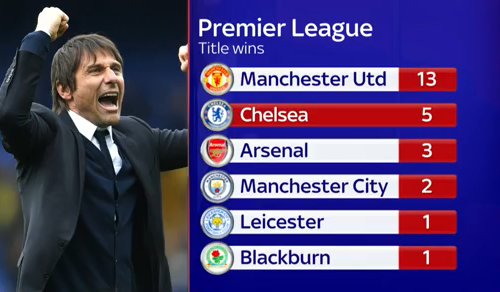 So Sky Sports report it as Chelsea winning their 5th Premier League title. Moving two ahead of Arsenal into second place. What it ignores is the 100 years+ of football that happened before 1992.

Chelsea last night won their 6th league title. This brings them level with Sunderland, 6th on the all time list. Behind Manchester United (20 league titles), Liverpool (18), Arsenal (13), Everton (9) and Aston Vila (7). Not quite as impressive now is it?

That is a tweet from the Premier League’s own Twitter feed. Not some shitty little photoshop created by some 14 year old in the UAE.

Chelsea have not made history. By my reckoning, the top flight of English football has been won on a Friday night at least 5 times. Including Arsenal at Anfield in 19889 – that season Sky refuse to talk about.

Chelsea yesterday made history by winning their 6th league title. But it was personal history. In the grand scheme of 140 years of English football, it was not historic. They now have as many league titles as Sunderland, who just got relegated.

Of course, some Chelsea fans (and even some Arsenal fans) will comment on things such as your’e turning into Liverpool fans, banging on about history. You might be right, by it is not me who bought up history. It is the Premier League who claimed that Chelsea were making history, and Sky Sports that count league titles from 1992. They are the ones bashing on about historical moments, whilst ignoring history.

The Premier League is not a new league established in 1992. It is the top flight of English football which dates back to 1888. All that has happened is it has changed its name, got a new trophy, become more about making money then the football, and slowly killing the English game for most real fans.