“I told you all that the Puma deal was not very good” is what GC said to me a few days ago when it was announced that Arsenal were considering pulling the plug on the deal with Puma that was agreed in 2014.

The Gunners agreed a £150m contract with the German firm in 2014, following a 20-year association with Nike.

At the time, the deal was widely hailed, with Puma confirming it was the biggest ever for both itself and Arsenal.

But the £30milllion-a-year deal has since been dwarfed by Premier League rivals. 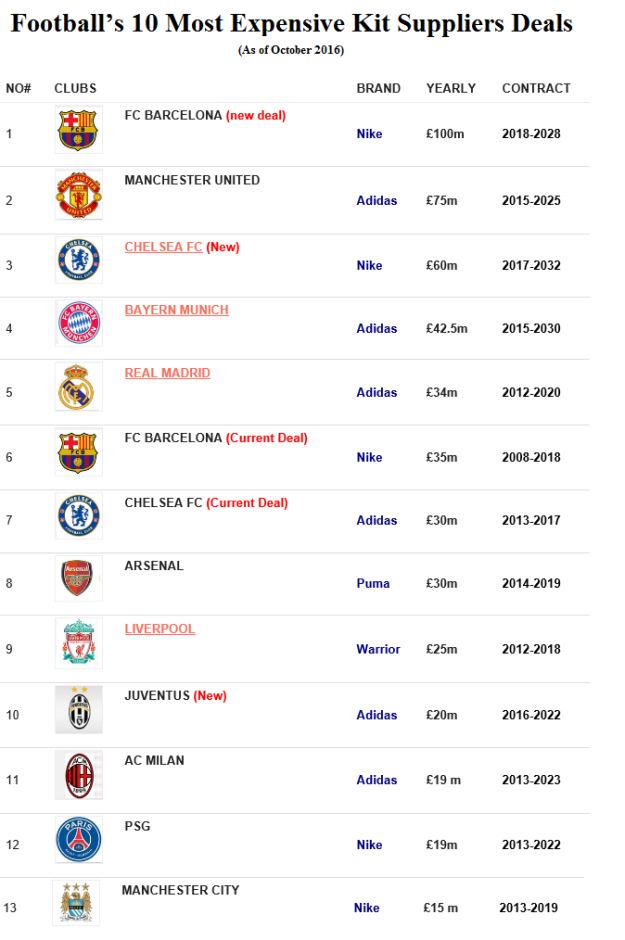 To a point, GC is right. At the time, only Real Madrid and Barcelona earnt more from their kit supplier. But within a year, Manchester United had shown the Puma deal up, signing a £75m a year deal with Adidas.

We are earning over 50% less than Manchester United’s deal signed in 2015, and half of what the new Chelsea deal is worth. That £30m could go on new players (although we have plenty of money for new players) or could go on bringing Arsenal’s wage bill closer to the likes of Chelsea, enabling us to offer Alexis Sanchez and Mesut Ozil what they really want.

It feels with Arsenal’s deals, we are always behind the curve. The Puma deal was the 2nd time we had signed a big money deal, one of the best in the world at the time, only for it to be dwarfed by other clubs within a year. The same happened with the Emirates deal when it was resigned.

It feels like we are always at the end of the cycle of deals. We are the last to get the deal agreed before everyone re-agrees new deals on even bigger money. And we are losing out big time.

Over the two years Manchester United have had their deal, they have earnt £90m more than Arsenal. This season will take it over £135m. That is a big chunk of cash.

We all moan about our kits:

But all 3 of these are linked to the deal.

3 kits every season – With a deal at £30m a year, or in Manchester United’s case, £75m a year, the supplier is going to want to maximise their profits. It is them, not Arsenal, who insist on 3 kits a year. If Arsenal wanted to play hardball, and demand only 1 kit change a year; which most fans want – then they would have to accept a vastly reduced sponsorship deal. You can not on one hand demand more from Puma (or Nike or Adidas), but then restrict them to one kit a year. That equates to less sells which in turn returns less profits.

The kit suppliers need to make back the money they have spent on sponsoring the individual club. If they have spent £30m a year to supply Arsenal with their kits, they are going to need to make that money back in sales. And remember, they have costs to design and manufacture the its. Even if they are using a Chinese Sweatshop.

The cost of the kits to fans is linked to what it has cost the supplier to sponsor and manufacture the kits. A Leyton Orient kit is half the price of an Arsenal kit – although an Orient kit is still way to expensive.

Like with the 3 kits a year, you can not wish for Arsenal to increase their income from kit sponsorship, whilst also moaning about the price of the kits.

Kit design – our kits this season are wank. Even though I believe if you have no plan to buy one, have not bought one for decades, and mock adults for wearing them, you should not really moan about the design, I still have the opinion that they are awful.

The problem once more is the more you demand in £££, the less editorial control you have.

The majority of kits supplied by manufacturers follow just a couple of designs. Note how the Spurs and Chelsea Nike kits are identical bar the colour.

Manufacturers are not going to design 3,000 kits for the 1,000 teams they sponsor world wide. They keep it simple, using a few different designs and just change the colours.

Whilst I am on about kits, here is some education for you all. Some fans believe that when you sign a new player, they pay for themselves in shirt sales. We saw this with Puma. But it is stupidity.

PSG sold 10,000 Neymar on the first day at €140 a piece. Some fans then did the math and worked out that PSG had made €1.4m from shirt sales on the first day, and that if that rate continued, they would have paid for the Neymar deal within the first year.

Firstly, the sales rate will not continue for a year. Most shirt sales will happen on the day the shirt is released, or when a new player is bought. Then they dwindle. Secondly the majority of people only buy one shirt. So whilst 10,000 Neymar shirts were bought, it will mean less di Maria, Draxler, Cavani, etc shirts will be purchased. That is the basics.

We then come to costs. The shirts were not free. A club does not get 10,000 Neymar shirts from Nike or Adidas (or whoever the sponsor is) for free. They have to buy them from the supplier.

When it comes to selling shirts, a club outlet store is no different to Sports Direct, Soccer Scene or whoever. They purchase shirts from the manufacturer, and then sell for a marked up price. They then make the profit on the bit in the middle. It is simple. Not hard to understand.

Infact, the likes of Sports Direct probably get the shirts from the supplier for cheaper as they buy a lot more than a single club. They might not buy as many Nike shirts of Adidas than Manchester United, but by the time you add the shirts manufactured by Adidas from every other club, they will lend up purchasing more.

It would not surprise me if there is a 100% mark up on kits. Therefore, PSG bought the kits off the supplier for €70. That means they will make €70 a kit. Still a decent profit. So in the first day of sales, PSG made £700,000. Just about enough to cover Neymar’s wages for a week.

Kit suppliers pay clubs a big upfront lump sum for the kit license to manufacture and distribute the kits. This is where the majority of the profit from clubs come from when it comes to selling kits. Club shop sales are negligible in comparison. Not player has ever had his transfer fee paid for by kit sales. It is an internet myth.

So it is a bit of a catch 22, we want the club to maximise its commercial deals, but in doing so, we open ourselves up to more kit changes and higher kit costs.