Tottenham finished above Arsenal last season. It was the first time since 1995 that they had finished above London’s most successful side. Arsenal won the FA Cup. 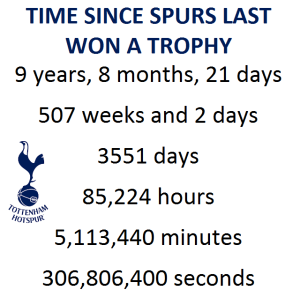 With them having been knocked out of the League Cup this year by West Ham, that clock will soon tick around to 10 years since there last trophy.

That is a bloody long time.

They are the media’s darlings. With their young talented Englishmen, their attacking brand of football, they approach the game in the right way. They are battling and competing against sides with much bigger finances.

In Mauricio Pochettino, they have one of the best young managers in the game. A true visionary. And in Daniel Levy a superb owner. Always gets top dollar when selling his best players. Keeping control of a tight wage bill.

But all this means for nothing if they fail to win trophies.

The majority of those boasting on social media about the power shift have only seen their side win a couple of League Cups in their lifetime.

To put that into comparison, my pals son is not yet 4 years old, and he has seen Arsenal (or at least been alive for) win 3 FA Cups.

Arsenal, a club in crisis, still winning trophies. Spurs, a side who are up their with Manchester United’s 99 team, Arsenal’s 2004, the famous Liverpool sides of the 80s, have won nothing.

There manager as well, the great Pochettino, this is his 9th season in management and he has yet to win a single trophy.

Arsene Wenger has been labelled a fraud in recent years. A declining manager. A man whose best days have been on gone. Yet he has won more trophies in the last 6 months than Pochettino has won in his managerial career.

I see Spurs fans posting up memes about Arsenal, and about Wenger. They sing about wanting Wenger to stay. They laugh at Arsenal not having won the league since 2004. They used to make silly memes about things that had happened since Arsenal last won a trophy.

The best comparison I have seen someone make over the Spurs side is they are reminiscent to the Newcastle side of the mid-late 90s, and the Leeds side of the early 00s.

Between 1995/96 and 1996/97 Newcastle United finished 2nd twice, playing a brilliant brand of attacking football under Kevin Keegan. In 1997/98 they beat the mighty Barcelona at home in the Champions League, Faustino Asprilla scoring a hat trick.

Bar a couple of FA Cup semi-finals in the following years, Newcastle won nothing. Their last domestic honour was the 1954–55 FA Cup.

Following on from Newcastle was Leeds United. A brilliant young side filled with English talent.

The previous year, they made the UEFA Cup semi-final. They also lost.

Both Newcastle and Leeds were relegated in the mid 00’s. They won nothing during their successful periods. Everyone loved them. The odd folk who have second teams cheered them on.

Ultimately, if you fail to win trophies, it does not really matter how many brilliant nights in the San Siro or Wembley you have. These games will just be forgotten into history.

I have laughed at the reaction to Spurs in the Champions League this season. You would think they were the first ever English team to have qualified from the group stages, or the first side to beat Real Madrid. It might seem I am coming across as bitter, but the reality is everything Spurs are currently do, I have seen Arsenal do, except for going 10 years without a trophy.

Until Spurs actually win something, they will be no more than a Leeds or a Newcastle. A side who has not win a trophy for decades, yet cling to the fallacy that they are a big, successful, club.

5 days to go till the North London derby…