But we could have got £60million for him in the summer is a common complaint upon hearing that we are about to swap Alexis Sanchez for Henrikh Mkhitaryan, with no cash exchanging hands.

A lot of people are looking at it as we are then getting no money for Sanchez, and therefore it is a bad deal as we could have got £60m in the summer.

Whilst they are not getting any money for Sanchez, what they are getting is a player that Manchester United were happy spending £37.8m on 18 months ago.

When you consider Alexis Sanchez is available on a free in just 5 months, the fact Arsenal are getting a £40m player in a straight swap is as good as Arsenal getting £40m for him.

But we could have got £60m for him in the summer, you still cry. And you are correct.

But had we sold Sanchez in the summer, we would have had to have bought a replacement. And every club in Europe would have known that:

All of that £60m, and maybe more, would have been invested in his replacement.

So in reality, Arsenal would not have been getting £60m for Sanchez, but swapping Sanchez for whoever his replacement is.

Would spending £30 and swapping Lemar for Sanchez be a good deal? No.

Another player is Julian Draxler. I imagine had we pushed for him, we would have been able to get him for similar to what we sold Sanchez for. So the £60m we got in for Sanchez would have been given straight to PSG for Draxler.

Julian Draxler is a very good player, but is he worth £60m? Would that price have been inflated due to the Sanchez cash? Possibly.

And then compare to the two players mentioned above to Henrikh Mkhitaryan. Are they actually any better? 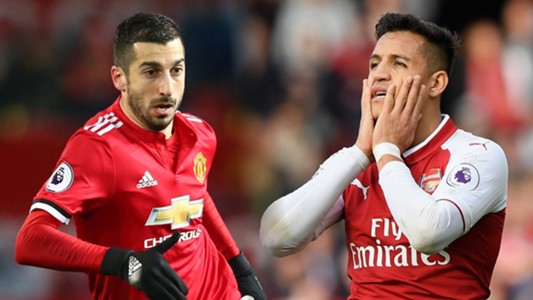 Mkhitaryan has had a tough 18 months in England, but he would not be the first free-spirited attacking talent to struggle under Jose Mourinho.

For me, he is on a similar level to Julian Draxler. Actually I would say he is better than Draxler as people still talk about the German as having potential, whilst Mkhitaryan is proven.

Then compare Mkhitaryan to Lemar.

One is a player who has had one good season, and struggled this, the other was quality in Germany over a number of years.

So Lemar would have cost us an additional £30m on top of what we got in for Sanchez, and he is not as good as the player we ended up getting.

Had we sold Alexis Sanchez to Manchester City for £40m and then bought Mkhitaryan from Manchester United for £40m, you would probably all be happy.

Now lets chuck Pierre-Emerick Aubameyang into the mix- a deal for £53m is moving closer.

We could end up with a situation where we get both Aubameyang and Mkhitaryan in, with Sanchez leaving, and a net spend of just £53m.

Let’s go back to the alternative deal in the summer of Lemar in, Sanchez out, and a net spend of £30m.

So for an additional £23m on top of what we were willing to spend in the summer, we are getting a Sanchez replacement and Pierre-Emerick Aubameyang.

Is the deal a good deal for Arsenal? Yes.

Ps: in their last season together at Dormund, the pair scored62 goals between them.

Legends + 89 mugs back on the shop for those whose hinting never paid off for xmas…https://t.co/vlaHeBWIC8 pic.twitter.com/wzvrWU5p7X

2 thoughts on “Mkhitaryan for Sanchez straight swap a “good deal”?”