So is today the day we buy Willian?

Could it be one of those ones where we are expecting us to announce Willian and we end up announcing Coutinho, Gabriel Magalhães or some other player?

Interestingly, Gabriel Magalhães (yes, I am copy & pasting his name) was left out of the Lille squad for a friendly.

I would still be surprised if we signed the central defender with Pablo Mari and William Saliba recent arrivals. But him joining would also highlight why Mikel Arteta was so desperate for David Luiz to stay.

Luiz could be key in helping his countryman settle.

In recent days we have had European football on the tele, and I could not care less.

I am actually happy that Olympiakos knocked us out of the Europa League. It allowed us to finish the season on the high of the FA Cup. A nice ending to the season.

Teams still in Europa potentially have another 3 games still to play, with the final not for another 11 days on 21st August. The Champions League final is 2 days later.

When you consider the new season starts on 12th September, teams still in Europe will potentially have a little more than 2 weeks off.

It will all be worth it if you lift the trophy at the end of it, but it is a hard slog to end up trophyless.

I am pleased our season finished with the high of the FA Cup win.

On a lighter note, I stumbled across one of those weird Twitter accounts that just copy and paste news headlines all day long. Their bio says they share “Reliable Arsenal FC News” and then they tweet this…

Bit of advice. Wikipedia is not a reliable news source! Do not do what I did 15 years ago and use it as a source in coursework for your law degree.

We have been linked with Wilfried Zaha again after he pointed to a “Zaha to Arsenal sign”. We have already outlined why Arsenal will avoid signing Zaha.

A few former Arsenal youngsters are performing well across Europe.

Jeff Reine-Adelaide and Ismaël Bennacer doing well at Lyon and Napoli alongside Serge Gnabry at Bayern Munich. Might do a blog this week on how youngster should move away for 1st team football rather than sign a new contract and spend 5 years on loan (ala Chelsea).

Neither of these players looked great in an Arsenal shirt. Both took a step down when leaving, got the first team football they desired and are now performing well at a decent level.

More on that later in the week.

Have a good day.

A lot happened yesterday in the world of Arsenal.

Firstly Arsenal announced in a very brief statement that Laurent Koscielny is leaving to join Ligue 1 side Bordeaux.

It feels like it is a real nasty, needless end to a player who has spent 9 years at the club.

The refusal to go on the American tour was out of character and the way he has departed as definitely damaged his legacy.

Instead of getting a big goodbye in front of an Emirates crowd like Aaron Ramsey did, he leaves with a black cloud over his head. Surely it would have been better to remain professional and have played one last time against Lyon in the Emirates club.

We thank Laurent for his contribution to the club and wish him all the best for the future just about sums it up.

£5million is a decent chunk of money a player that turns 34 in a month. Arsenal have also chopped off nearly £5million off the age bill. Hopefully this frees up further cash to go for a centre back in these late hours.

We then had the news that Eddie Nketiah may well spend next season on loan, with Leeds being front runners for his signature.

It will be a make or break move for Nketiah who finds his playing time at Arsenal limited behind Pierre Emerick Aubameyang and Alexandre Lacazette.

Some fans are moaning that he should get more of a chance at Arsenal, but with two world class strikers ahead of him, minutes will always be tough to come by

If Nketiah does exceptional, he will return to Arsenal and be prepped be Lacazette’s long term back up (taking into account next summer Aubameyang will have just 1 year left on his contract). If he only does OK, Arsenal will probably look to move him on.

With the likes of Tyreece John-Jules (18), Folarin Balogun (18) & Gabriel Martinelli (18) coming up behind, Arsenal will soon have to make a decision whether to continue investing in Nketiah’s development, or move him on in favour of those a couple of years younger.

The expectation was that with Danny Welbeck leaving on  a free at the end of last season, Nketiah will move up to 3rd choice striker – and maybe even the only striker on the bench if Aubameyang started on the left.

If the plan is to use Aubameyang solely as a striker, then loaning out Nketiah makes sense.

And it may well be Aubameyang and Lacazette competing upfront if Arsenal complete the signing of Philippe Coutinho.

According to stunning reports in France, Arsenal have agreed a deal to take the Brazilian on loan. Wait and see on this one I guess.

Than over night that Danieledaniel Rugani rumour reared its head again; with Arsenal having reportedly agreed terms with the young Italian.

Fans seem split on this one, with many calling him the “Italian Mustafi” and others saying he is a top central defender who just has not had his chance at Juventus.

A deal to bring the 25-year-old to London on a 2 year loan deal before making it permanent in 2021 does make a lot of sense in terms of budgeting.

Still plenty likely to happen over the next few days (and even between the writing of this blog and publishing).

Do not be surprised to see a deadline day central defender come in either.

Yesterday it felt like every hour a different rumour was breaking.

One more blog and it will all be over.

Further to this mornings article about Mesut Ozil, I thought I would run some figures.

A lot of people moan that Ozil does not do enough, and it got me thinking. In terms of goals and assists, how does Mesut Ozil compare to other Premier League number 10’s. So I did a little comparison with Ozil and players who perform a similar role to him (ie the likes of Eden Hazard and Alexis Sanchez were excluded as they are very different players).

I have used Premier League statistics at their current club only.

An argument about Ozil is that he does not score enough. He is 6th on the list, so it is a justifiable argument, but I do not hear people moaning that Cesc, Mkhitaryan or David Silva do not score enough. And he is not too much behind Kevin de Bruyne. Even Cristian Erickson, a player known for being a goal scoring midfielder, scores his goals exactly one game quicker than Ozil.

To put that into perspective, based on their ratios, Erickson would score 8 goals a season (if he played 38 games), whilst Ozil would score 7. Dele Alli’s games to goals is terrific. 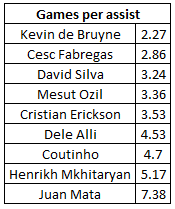 Bit of a surprise that Ozil did not top this one, as he is known as an assist king. I was also surprised about how far ahead Kevin de Bruyne is from the rest.

Two of the 3 above Ozil for assists are below him for goals. In fact, bar Henrikh Mkhitaryan, there is a clear correlation on the list, the more goals you score, the less assists you make, and vice versa. Someone like Coutinho scores a lot, but does not provide too much. He always takes the shot. Whilst someone like Fabregas always makes the pass rather than the shot.

It is perhaps therefore import to combine the two. Goals and assists.

Kevin de Bruyne is clearly the most effective Number 10 around at the moment. He scores goals and gets assists. He is an awesome player. He cost £59.7million.

Thinking out loud here, de Bruyne is 25% more effective than Mesut Ozil when it comes to goals and assists, and he cost 25% more. You get for what you pay for I guess.

I was surprised to see the two Tottenham players, Erickson and Alli, 2nd and third on the list. Both players also cost a lot less than every other player on the list. Have to wonder how long they will stay at Spurs for, winning nothing.

4th on the list is Mesut Ozil. He averages a goal or an assist every 2 games.

Ozil is more effective than the likes of David Silva, Cesc Fabregas, Coutinho and Juan Mata. Often labelled as a waste of money, that he has been a £42.5m flop, what about these players?

Barcelona were willing to spend £100m on Coutinho, yet Ozil outperforms him. Where is the criticism for these players?

So before you get on your high horse and moan about what he delivers and his cost, understand that he performs better than a lot of players, who cost a similar amount. Everything is relative.

As a final thought, if I asked you, who would you prefer: Ozil, Cesc, Silva or Coutinho, I bet Ozil would come bottom, yet he out performs all of these. Time for a poll:

Who would you prefer….