The 2019 summer transfer window slams at 17:00 BST on 8 August. That leaves just 6 days for Arsenal to complete their transfer business.

After a slow start with just Brazilian youngster Gabriel Martinelli joining the club at the beginning of the month, Arsenal announced the double move of Dani Ceballos and William Saliba towards the end of July. Ceballos on loan from Real Madrid, with Saliba remaining on loan at St Etienne.

As July turned to August everything went a little bit mental and Arsenal broke their transfer record signing Nicolas Pepe for £72million, dispelling the media lies around the club having just £40million to spend.

The signing of Pepe showed that form is temporary, class is permanent and players would rather join a big club not in the Champions League over a small club in Europe’s premier competition.

It has been a decent window for the club so far, but we still need to make a couple more transfers. If we get those right it could become one of Arsenal’s best transfer windows in a decade.

We have been heavily linked with Kieran Tierney over this summer and it is clear that he is the clubs premier choice to be 1st choice left back. It is a deal we need to push over the line.

It was the defence that let Arsenal down last season and was the primary reason why we are not in the Champions League.

With Laurent Koscielny unlikely to ever play for the club again and Shkodran Mustasfi being offered around Europe, a new central defender is surely on the cusp of coming in?

In recent days both Samuel Umtiti and Daniel Rugani have been linked.

Arsenal are also short in midfield, especially if the club decide to cash in on Mo Elneny.

The Egyptian leaving would leave us with just Granit Xhaka, Lucas Torreira, Matteo Guendouzi and Joe Willock in midfield.

It would only take a couple of injuries or suspensions to see us line up with the 2 teenagers. Clearly we would need to sign a senior pro to replace Elneny. Khedira?

On a side note, we are reportedly in the market for a youthful 3rd choice goal keeper.

We have 6 days to get them.

Less than 30 left – Will never be reproduced

Khedira was spotted at the Emirates at the weekend watching the Emirates cup. This led a lot of fans and media to speculate that Arsenal were on the verge of signing him on a 2-year-deal. 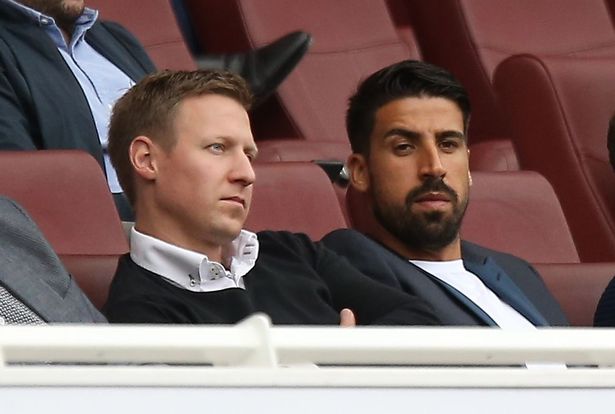 Having played just 10 league games for Juventus last season, the Italian champions have reportedly told Khedira that he is surplus to requirements and may leave on a free transfer.

This summer, Juventus have added Adrien Rabiot and Aaron Ramsey to their squad. They also have Emre Can and Blaise Matuidi. Khedira is at the bottom of the pile and even less likely to lay than he was last year.

So should Arsenal make a move for the experienced central midfielder?

Arsenal currently have Granit Xhaka and Lucas Torreira as senior central midfielder. They have recently added Dani Ceballos but he is more of an attacking option, a Ramsey replacement and back up to Ozil.

Maitland-Niles will be in the 1st team squad next season as cover for Hector Bellerin, so should be disregarded as a central midfielder. That leaves Guendouzi, Elneny and Willock.

Picture a scenario where both Xhaka and Torreira are out injured, suspended or a combination of the both; would a midfield contain 2 of Guendouzi, Elneny or Willock make you comfortable?

Guendouzi and Willock are talented teenagers with plenty of ability and energy, but they could do with an experienced head alongside them.

That then takes us to Elneny. Is he the senior back-up for Xhaka and Torreira?

Last season when we played Guendouzi and Elneny together, the Frenchman became the senior partner. Elneny looked shot and is clearly not top 4 class.

So if we are not comfortable with the two teenagers together (although I would have them together in the Europa League), the question becomes a simple one:

Khedira on a 2-year-deal would add experience to the squad whilst Guendouzi and Willock continue to develop.

But is he just a Stephan Lichtsteiner MK II?

His best days are certainly behind him and he looks slow in Serie A. Could he cope in the faster paced Premier League?

Injuries are not a new thing for Khedira – he has played over 30 league games just once in his illustrious career. What is the point of him being a senior option if when needed he is in the treatment room?

A lot of the blame for Germany’s early exit from the 2018 World Cup was put on him. He has not been seen in his national shirt since.

Whilst he is a free transfer, he will surely command a decent signing on fee. Arsenal will be his retirement package. He is also on £20,000 a week more than Elneny.

Any fee from selling the Egyptian will be negated by a higher weekly wage and a signing on fee for Khedira. A £5million signing on fee plus an additional £20,000 in wages would see Arsenal spend around £7million more on the German than Elneny currently costs. Arsenal are unlikely to recoup much more then this selling Elneny.

Unai Emery has also reportedly made it clear that he will happily sell Mesut Ozil if the right offer comes in. The feeling is Ozil will still be at Arsenal next season. But what is the point in signing a ally of him if he will be out of the door in 12 months?

Arsenal should be focusing their time and effort bringing in younger, more dynamic players, rather than topping up the pension of a player who could be past it.

Plenty to think about then.

Personally I would not be too upset if Khedira came in on a 2-year-deal; £70,000 a week. He would add experience behind Xhaka and Torreira and would also provide a more defensive option if we want to go for a solid midfield 3 in tough away games.

Play him in a 3 alongside Xhaka and Torreira will mean others do his running and his excellent positional sense will provide a shield for the back 4.

I guess watch this space…

Less than 30 Clock Watches left – will never be made again

So it’s December the 1st. That means it’s time for us to dust down the spreadsheet and start logging.

Of course, this is not us linking the players, nor saying we will sign them, it is a list to highlight just how much crap the media print to fill column inches / get web hits.

All players linked will be added to our dedicated page. Keep an eye on this and feel free to add players we’ve missed to the comments section.

On the opening day, we have already been linked with Karim Benzema, Lucas Silva and Sami Khedira