I am getting fed up of speaking about the Welshman. I have been one of his biggest supporters for some time. For me, he has been brilliant for 12 months, not just this season. The main difference between this and last season is the goals. And what a goal it was against Liverpool. That is the type of finish you do when you do not need to think about what you’re doing. 10 games in, he should already have the Premier League Young Player of the Year wrapped up. Although it still would not surprise me if it go’s to Andros Townsend, despite him scoring as many league goals for Tottenham as Asmir Begovic has scored for Stoke City.

A lesson to every young footballer here. Never stop playing. Another player, after the header hit the post, would have put his head in his hands and missed the chance for the tap on. Cazorla did not stop running and, whilst Skrtel stood still Cazorla got onto the rebound 1st for a brilliant finish. Always be moving. As soon as you stand still you miss an opportunity or end up a step behind.

It sums up the strength of our midfield that our £42.5million signing had a poor game against one of our title contenders and yet we still dominated the middle of the park. With Cazorla, Ramsey & Rosicky performing – And Arteta regaining his form and fitness – it shows how important a squad can be. The more better players you have, the less of an effect a poor performance by one player has.

According the Physio Room, Arsenal are top of the league. Unfortunately it is the injury table we are top of, rather than the Premier League. You have to go to the Premier League’s official site to see us top of the one. And that is what I feel is exciting. We have 9 injuries. Diaby, Oxlade-Chamberlain, Podolski, Sanogo, Walcott, Flamini, Gnabry, Wilshere and now Gibbs. We played Liverpool with 8 players who would have been in the squad. Add in Gibbs and we are in the middle of an injury crisis. It perhaps shows on the bench (Although we still had 5 Internationals with 136 combined caps and 2 England U19 players) that we are suffering, but on the pitch we are not. Top of the league with these injuries, how far can we go when even half of those players return?

A lot of talk this morning how Liverpool fans were robbed due to the quick free kick. It is a non story. Martin Atkinson gave the free kick, and was in the process of correctly booking Bacary Sagna when the quick free kick was taken. Martin Atkinson did not restart the game, and due to his decision to book Sagna, Liverpool have to wait until the referee has booked the offending player and then restarted play. There is no argument to be had here. Liverpool were not robbed. There was no goal to be ‘disallowed’ as play had not restarted. 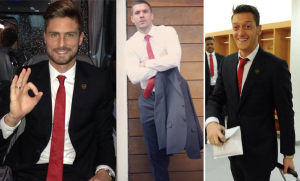 It is only a little thing, but how sexy was that suit? Some have said for a long time, we are The Arsenal, we should be wearing suits. Hopefully this is a return to them. I do not know who made the decision that we start wearing them, whether it be Wenger, someone at board level, or the players themselves, but it is a good step in rebuilding the view that Arsenal are the class of English football. 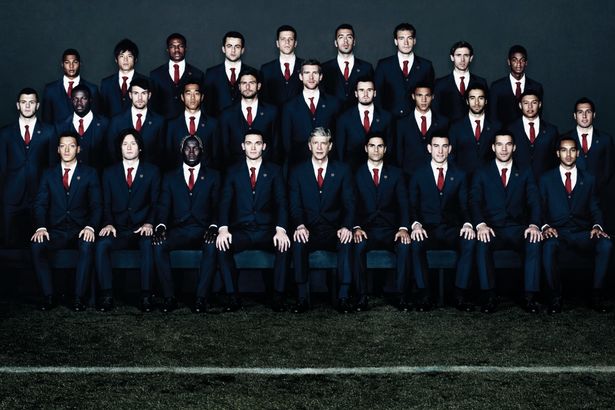 Football is easy in hindsight. Transfers even easily. Before he scored against Chelsea, I commented on Twitter that he could have been an addition to the squad. He would have been able to provide good back up to Olivier Giroud, whilst also being able to play out wide. Taking into account the injuries to every single one of our wide players this year, he probably would have got minutes in every single league game this season. With him currently on bail until November 21st for an alleged rape, I can understand why we did not sign him. However, if he is found not guilty, Arsenal should explore as to whether we can break his season-long loan deal with Newcastle.

Yesterday was supposed to be our first big test. We passed that. And as expected, pundits have now moved the goal posts. Rather then Liverpool being the first test, the criticism is now that we have yet to play Manchester United, Manchester City or Chelsea. Sounds like sour grapes from pundits who can not admit we are in the title race. And as Chelsea showed in a defeat to Newcastle, every game in the Premier League is a potential defeat.

Every game in the Premier League is a test, and all you can do is beat whichever team you are playing that weekend. All a victory against Liverpool has reinforced in my mind is that we are title challengers.