The Arsenal first wore a golden Yellow shirt in the FA CUP final in 1950 and again in the 1971 final. From elder fan’s I have spoke to the “she wore a yellow ribbon” song was sung in the late 50’s but took until the 70’s to really become popular. 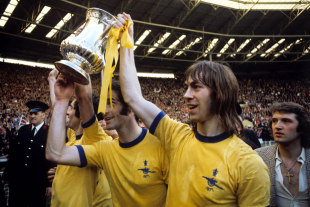 Like all football songs old and new they are ripped off from a popular song and ‘she wore a yellow ribbon’ comes from a 1949 John Wayne’s film of the same name. It become a song that was sung in different army regiments as well as other football clubs, West Ham and Villa have a claret version, but it was The Arsenal that made the song our own with 3 cup finals in a row 1978/79/80. 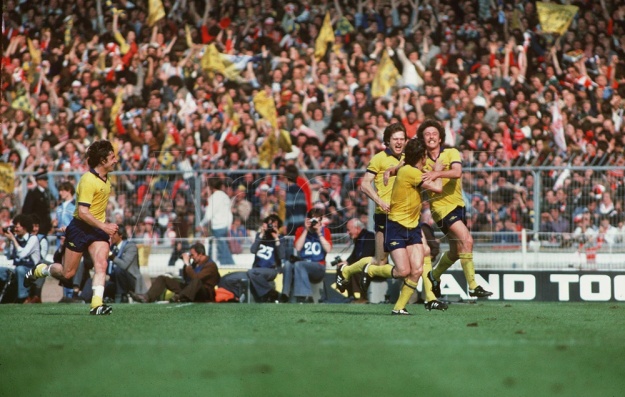 This website was formed in 2007 and named after the song and in 2011 when the club ran the competition ‘build a banner’ a ‘she wore a yellow ribbon’ banner was made and sits proudly in the North East corner of the ground. 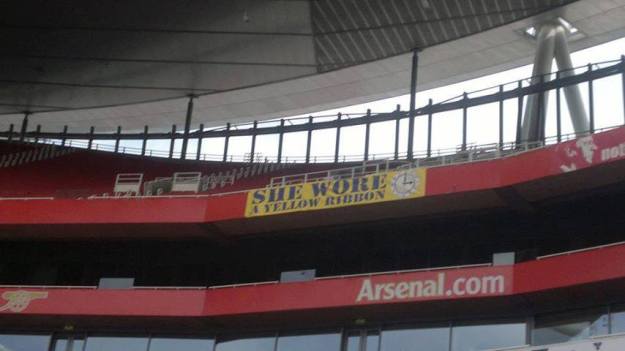 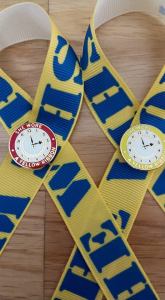 Clock BadgePins and ribbon from http://www.shewore.mysupadupa.com click picture to goto the shop 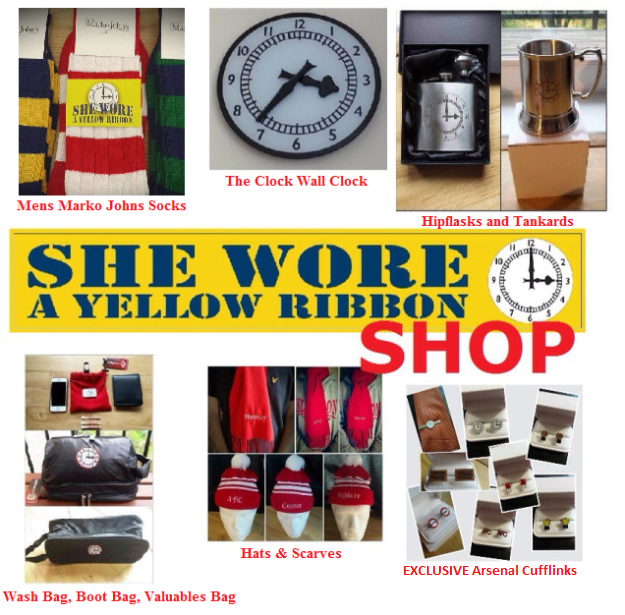 1) In 2013, we only lost to Bayern Munich on away goals. We have since improved.

3%) What let us down in the first leg last time out was defensive errors. Since then, we’ve kept shit loads of clean sheets and have a keeper whose never been in better form.

4) Bayern Munich might be unbeaten in the Bundesliga this year, but this is a bigger indictment on how poor the German league is, than how good Munich are.

5) Bayern Munich are not challenged week in week in Germany. They will struggle to raise their performance for us.

7) The last time Bayern Munich failed to score in a a game was against Arsenal.

9) We have a Big Fucking German. Bayern Munich don’t.

Hope everyone reading this whose going the game tonight get’s in early to take part in RedActions card display.

It’s December 2008, and I suddenly realise I am in a spot of bother. I am sitting in my Lounge in my house in Harare, the capital city of Zimbabwe. The country formerly known as the bread basket of Africa had been crippled under the Robert Mugabe regime who after 28 years in power had lost the presidential election and undertook a bloody campaign in order to stay in power. It worked and he remained president. The economy hit all time lows with world record levels of inflation being recorded. It was difficult to measure but it was estimated that monthly inflation hit its peak about a month before, at 6.5 sextillion percent. For those of you who perhaps don’t know a sextillion is equivalent to a trillion billion so that’s 6,500,000,000,000,000,000,000%. What this meant is that money had lost all value. It was cheaper to wipe your arse with the highest denomination note (Z$100 trillion) than it was to buy one square of toilet paper to do the same. It was more or less impossible to buy anything in the shops. The country had ground to a halt.

This was the world that had greeted me when returning home on vacation from Rhodes University in South Africa. On top of this, we had not had water supplied to our house from the municipality since 1999 and we were in the middle of a 5 week power cut. Things were dire, it’s hard to describe. And to top it off my parents had conveniently absconded to South Africa for a wedding, leaving me with an empty fridge (no power anyway) and a small amount of Zimbabwe Dollars (a few kazillion perhaps). To compound these problems, my brother and I had gone out on a week-long binge on our return and spent all the cash. In our defence though, at the rate it was devaluing, we had to spend it before it was worthless. But now we had no food, no money, and no transport and had been surviving off the garden in a Bear Grylls like manner.

However none of the aforementioned issues were the cause of what was troubling me at that exact moment. The only thing that was troubling me, as I put some water on to boil to hopefully avoid becoming another statistic in the outbreak of Cholera, was that Arsenal was playing Liverpool in a few hours, and due to the lack of electricity I had no way to watch it. My only option was to try and source some petrol to fire up a generator which would power my TV and Satellite dish. This however was no easy task as my car had already run out of fuel, there was no fuel available at the service station and I had no Zimbabwe dollars to buy fuel. Unperturbed I took the last $20US note, which I had been saving for complete emergencies, developed a plan and set off by foot on my way.

Having spoken to every dodgy person I knew in search of Zimbabwe dollars, my first port of call was an illegal black market money dealer. This bloke owned a commuter taxi service and so had cash in the form of Zimbabwe Dollars available which he sold for extortionate amounts. He would for example accept a cheque for 500 trillion dollars in exchange for 100 trillion in hard currency – such was the premium on cash. Ridiculous. I pitched up at his place, and after persuading him I was not any form of law enforcement officer, and much haggling, he exchanged the $20 for a duffel bag full of Zimbabwean dollars the exact amount of which I cannot remember.

Second obstacle to cross was trying to find petrol. Luckily again, I knew a bloke who knew a bloke who worked in a fuel station but he was about a 4 mile walk away. After much pleading he sold me 15 litres of petrol. Back then we had to physically weigh money on a scale to check it was as much as being claimed as it was too time consuming to count such large quantities of cash. The deal was done and I set on the long walk home with 15 litres of fuel in a container balanced on my head. But at least I had gotten rid of that bloody bag of money to make the journey easier! After a very painful walk home I made it back just in time for kickoff. But it’s like my old man always says, ‘Africa is not for sissies’. I fired up the generator and turned on the telly just in time to catch the end of that bloody Gary Bailey giving his pre-match analysis. He was biased as hell against Arsenal as usual! The actual game was a disappointing 1-1 draw. Some dutch person whose name I can’t remember scored for us and some Togolese bloke got sent off. And Fabregas got injured for a few months. Robbie Keane scored a goal and that was definitely fluke. But the main thing was that I wasn’t gonna have the last thing that I had taken away from me: The Arsenal.

So how you may be asking now did I become a Gooner? That’s what ‘The Arsenal and Me’ is all about after all. Well in was inevitable really. It was in my blood. My mother is a staunch Arsenal Fan, she watches every game. She speaks fondly of her larger than life grandfather who was Arsenal mad and went to every game at Highbury. Despite my grandparents immigrating to the British colony of Rhodesia as it was then, due to a lack of jobs in post war Britain the undying support for Arsenal continued in the family.

It was inevitable that I would move to London and when I did so 2 years ago Arsenal was at the top of my agenda. Suffice it to say my match days are somewhat different now than to the one described a few years ago above. The beer always flows at the Tolly and other surrounding pubs, and I am constantly grateful to be able to watch my team live and be part of the Arsenal community. That said I am also am very thankful to have had the upbringing I did in Zimbabwe and I was lucky enough to explore some of the more remote areas of Africa. And the funny thing is no matter how remote and rural the area you are in, no matter how far away you are from a television and civilisation, people can always tell you the football scores from the weekend. Football is an incredibly global phenomenon and it has been a pleasure to meet gooners from all walks of life. I look forward to sharing a pint with more of you in North London in the future.Johny
Follow @johny_co
If you would like to tell your Arsenal story, click here