Sorry for the late blog today. Thought I would leave it a bit to let yesterday’s Liverpool Myths Exposed blog really hit home.

And how it has hit home. The Scousers, true to form, have basically justified everything written with their bleating. They filled up the comments section on this site, as well as ensuring that both SheWore’s and my own twitter mention’s were kept busy on the bank holiday Monday. Guess the truth hurts them.

My next sentence was originally going to be ‘anyway, back to Arsenal’. But it is impossible to ignore today’s big news, that David Moyes has been sacked.

The David Moyes saga has highlighted 3 factors that Arsenal need to take into account as, and when, Arsene Wenger leaves.

1) Do not listen to the fans – Last summer, before being appointed by Manchester United, he was top of the list for many an Arsenal fan to replace Wenger. And bring Felliani too. How many now are calling for Wenger to go as Moyes is available again? Very few, if any.

Recently, many an Arsenal fan have called for Roberto Martinez to come in, and bring Ross Barkley with him. De ja vu anyone? Whilst fans are passionate, and are the most important factor of a football club, they might not be the most knowledgeable. Let’s leave it to the board to pick Wenger’s replacement, hopefully using the 4 criteria he must fulfil, and hopefully they get it right.

2) Better the devil you know – Yes, Wenger is doing an average job at the moment. Yes, we have not won anything in 8 years. But that does not mean we should rush out and replace him. It is important that we get the right man in, and do our research when deciding who that man is.

As Manchester United have shown, if you get the wrong man in, the consequences can be disastrous. In the hope of saving his job, Moyes spanked millions on Mata, millions on Felliani, and gave Wayne Rooney a massive pay rise and contract. Only to be sacked. This ties up a lot of money for the next manager.

Whilst Wenger is perhaps not the best manager for Arsenal at the moment, he is the devil we know. Better to keep him and finish 4th, then replace him and finish 7th.

Rumours are that Fergie deliberately picked Moyes as he knew he would fail, therefore reinforcing how great Fergie was. Whilst this is likely to be ludicrous, these types of rumours can be detrimental.

Too make matters worse, Fergie remained in the shadows as part of the Manchester United set up. Were Wenger to pick his own replacement, then move upstairs to be director of football, his shadow would cast long and hard over the replacement.

Not only should Wenger not be picking his replacement, when the time comes for him to go, he should step away from the club completely.

So what is my opinion on Manchester United? They got rid of Moyes due to lack of Champions League football. This means they pay out less compensation. They realised they got in the wrong man, so have sacked him swiftly ensuring the least amount of compensation paid. Why give him another year, where the highest they’d likely finish is 4th, and still have to sack him for more money?

With Luis Van Gaal available, he will surely come in next summer, scuppering Spurs plans – although they’d surely go for Moyes. With Van Gaal, Manchester United would have a very good manager with a lot of international draw. I would not be too surprised to see his first signing be Arjen Robben.

And what does this all mean for Arsenal? Other then getting to laugh at the Mancs, it highlights further just how careful we have to be when replacing Arsene Wenger. 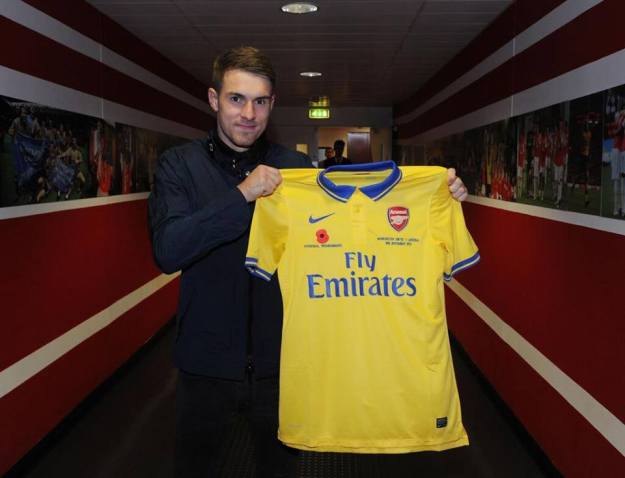 1.. Have to say it but Wenger was right to highlight referees and Old Trafford. Young’s dive last week was a disgrace to football and it’s far from the first time a ref has been conned at that ground.

2.. Clean sheets Vs the inform Liverpool strikeforce and away at Dortmund will give our back 5 enough confidence to keep out RVP and Rooney.

3.. Gibbs got another call up to the full England squad, I’m so happy for him. I said at the start of the season if he can keep fit he would be an outside chance to go the World Cup in the summer and he keeps this up it will be hard for Roy not to take him.

4.. Kos and Per are fast becoming the best CB pairing in the country, they have cut out the silly mistakes, hold a higher line than before (Bould’s influence ?) and as important have total faith in the keeper behind them.

5.. I have always believed that every great team has a great spine to it, Eg Seaman,Adams,Vieira,Henry. For the first season in a long time we look like in Chesney,Per,Arteta,Giroud we have a good spine to the side.

7.. Rio Ferdinand will struggle with Giroud’s strength today and I cant wait to see Ramsey run through him like he’s not there.

8.. Ozil, even when he’s having a quiet game he’s good. If he’s not slipping down the right he is keeping the ball wisely whilst we have possession and as importantly just having him on the pitch gives the opposition something to think about and our other players more space.

9.. Flamini and Wilshere are both in the squad, expect both to start on the bench.

10.. Wenger Knows, the way he has been treated personally at this ground, by fans, staff and the ref’s has been disgusting. Let’s hope today he gets some revenge on the pitch.

I am a cricket fan (despite this, please read on). For a long time in cricket, there was something called the ‘Shane Warne Theory’. The basics of it were that legendary Australian bowler Shane Warne could take wickets by being just Shane Warne. He did not need to bowl great, he did not need to spin it round corners, he could bowl slow and straight and take a wicket, because he was Shane Warne. A slow straight ball could get someone out, and his victim would be adamant that the ball span. Shane Warne had a physiological edge over opponent batsmen.

Batsmen would be beaten before they had faced a ball. They would be beaten before they walked to the crease. They lost their wicket in the dressing room, where they were fearful of facing Shane Warne. Fearful of how far he would spin it. Fearful that he was the greatest bowler of all time and that he would add their scalp to his collection. When they finally got to the crease, they looked forward, the fear was in their eyes. They were like a deer in headlights. And before you know it, Warne had bowled a tame, straight delivery, and the batsman was heading back to the pavilion. He had been beaten, not by the ball, but by the bowler. The fear factory of Shane Warne.

Manchester United under Sir Alex Ferguson also had this. Like with a cricketer playing the bowler, rather than playing the ball, teams went to Old Trafford and became scared. This was Old Trafford. This was Sir Alex’s Manchester United. Winners of 13 of the last 21 titles. They did not play the 11 players on the pitch, they played the club, the manager, they played Shane Warne.

The amount of times I watched Manchester United play another Premier League side and that side throw the game away. Run scared. Change the way they play, and end up defeated. I have seen sides put in a heroic performances against Arsenal to snatch a draw, or win, to then next week, play with fear. It is as if they were a different side. And defeat followed.

In the 2010/11 season, Manchester United won the league title. The key behind their success was home form. They won 18 out of 19 games. Now this was not a vintage Manchester United team. There were no Ronaldo’s, Giggs (before he became a pensioner), Cantona’s, Keane’s or Beckham’s. No, they had this record with a very average squad. Owen, Anderson, Smalling, Park, Hernandez, Carrick, Nani, Fabio, Rafael, O’Shea, Fletcher, Valencia, Obertan, Macheda, Gibson & Bebe all played a part.

Read those names again, take out the fact they play for Manchester United, and you will realise they are all fairly average. How did they win 18 of 19 games at home? The fear factor.

With Sir Alex Ferguson leaving, the fear factor has left as well. David Moyes is an ordinary manager, and suddenly, teams are not looking at Manchester United like a world class team full of world class players, they are looking at them for what they are, a mid table side with distinctively average players.

Bar Wayne Rooney and Robin Van Persie, they have no world beaters. An average goal keeper. A defence which will either contain aged, past it players, or young, naive players (Smalling – The English Senderos), full backs which can be got at, a slow, uncreative midfield and little width. The fact is Manchester United are not very good. Yet they are no different from last year, when they were Champions. What has changed? The fear factor have gone. Side are now playing the 11 players on the field, not Manchester United the club.

Of their 5 homes games this season, they have only won 2 of those. A 3-2 victory over Southampton and a 2-0 win over bottom placed Crystal Palace. Not exactly convincing!

The fear factor has certainly gone with Manchester United. And with Arsenal unbeaten away for over 260 days, the psychological aspect of the game could be turning. They should be fearing us now.

Manchester are there for the taking. Play without fear and we win.