In November 2013, I did a little analysis to see who was the most followed football club on twitter. Arsenal came out on top, but what was surprising was that, at the time, Mesut Ozil had more followers than any Premier League football club.

As it is quite at work in my industry with the lead up to Christmas, I have decided to review the blog and update the figures.

To get a proper provisional analysis, the above is a list of teams who were in the Premier League in 2013, and are in it now.

The first interesting analysis is just how much Twitter has grown over the last 4 years. On average, Premier League sides have increased their following by 552%.

Secondly, Manchester United, who in 2013 were the 4th most followed side in the Premier League, are now topping the table.

The growth of Manchester United aside, Arsenal, Chelsea, Manchester City and Liverpool have shown a similar growth pattern.

With regards to Liverpool and Arsenal, it shows how strong and historic the clubs are, that they have been able to continue to grow their support without league titles at a quicker rate than the likes of Manchester City and Chelsea who have won league titles. It shows success is not everything.

Saying that, Spurs now languish a long way behind Manchester City. I wonder how many of those fans that follow City had heard of the club when Twitter was first launched back in 2006?

City’s growth over Spurs does highlight that success is very important, especially when it comes to gaining new fans, and foreign fans.

Spurs have not much bigger a following than Everton, an equally unsuccessful side over the last 20 years. It perhaps shows that Spurs fans claim that there has been a power shift, and that they are a massive club, are false.

In terms of Twitter following, Spurs are the 6th most followed in England. They are probably also the 6th biggest club in the country.

The second table is the clubs who were not in the Premier League in 2013, so I have no original data on them. What is interesting is Leicester City.

At 1.1million followers, they would be placed just behind Newcastle. It would have been interesting to see their 2013 data in comparison. I imagine it would have been not too much higher than Southampton. Leicester’s does show just how much success can increase support.

Like success has boasted Leicester, relegation is also clearly damaging.

Those clubs who went down have still grown their twitter following, but at a slower rate than those who stayed in the Premier League. 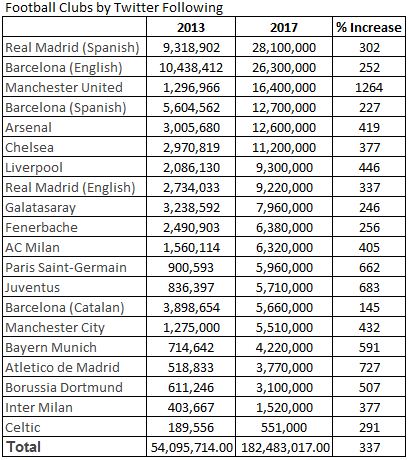 The first observation is that Real Madrid have overtaken Barcelona since 2013. Although by the time you include alternative languages for both, Barcelona are still ahead.

Perhaps this indicates that Real Madrid are more popular in Spain, whilst Barcelona are followed more by foreign fans. I know what I would prefer.

Another interesting thing to note is once you remove the English sides, the rest of the world has only grown by 293%. That against the Premier League’s growth of 522%. It shows that in terms of leagues, the Premier League is still the most popular in the world, even if Barcelona and Real Madrid are streaks ahead in terms of individual club.

The last thing to note is how small Celtic are.

With just 551,000 followers, they are not much bigger than Norwich City, and are well behind the likes of Crystal Palace, WBA and Swansea. They might be a big side in Scotland, but it certainly shows they are a big fish in a small pond. And if they ever did join the Premier League, they would be a very small fish in a big pond.

7 thoughts on “How many Twitter followers does your club have?”