With the transfer window slamming shut, Arsenal’s activity has left them with just 2 members of the squad who have been with the club since the 2012/13 season. Nacho Monreal and Damián Martinez. 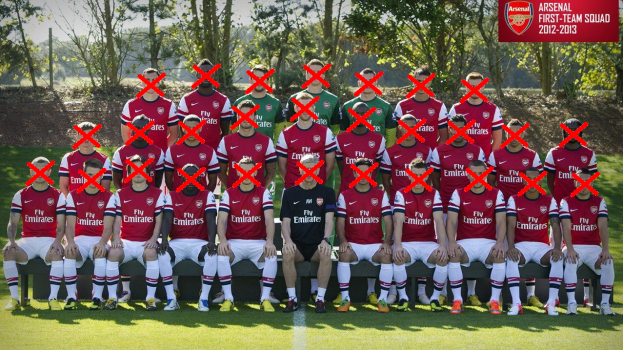 This summer we have seen Carl Jenkinson and Laurent Koscileny both leave. They were the only two remaining players from the 2012/13 squad picture, with Monreal joined us in the January transfer window.

It feels like a huge squad turnover, that out of the 35 players to have pulled on an Arsenal shirt during that season, just 2 remains.

How does this compare with the rest of the top 6?

Just Jordan Henderson remains from Liverpool’s 2012/13 squad. They have the highest turnover over all of the top 6. Not a surprise considering they finished 7th that season.

The aforementioned Nacho Monreal is still at the club having signed a 1 year extension a month or so ago. Damián Martinez played twice in the League Cup that year.

The 2012/13 league champions have kept hold of Phil Jones, Ashley Young, Chris Smalling and David de Gea. Although many Manchester United fans will question how the 1st 3 are still at the club, and David de Gea probably wonders how he has not yet secured a move away.

Just 20 left – never to be repeated